German mercenaries to fight UN-backed government in Somalia | World | Breaking news and perspectives from around the globe | DW | 23.05.2010

A German security company has sealed a deal with a Somali warlord that politicians say violates UN sanctions. According to German TV, more than a 100 former Bundeswehr soldiers will fight as mercenaries in Somalia. 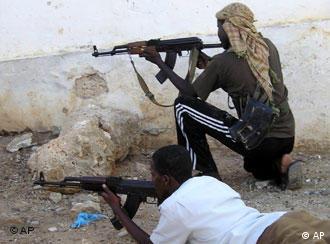 Former Bundeswehr soldiers are to fight as mercenaries in the civil war in Somalia, according to German public TV station NDR.

Asgaard German Security Group, a company based in Telgte near Muenster in northwestern Germany, has clinched a deal with Somali opposition politician Galadod Abdinur Ahmad Darman, who wants to topple the internationally-recognized Transitional Federal Government (TFG) in Somalia.

Security experts warn that a Somali warlord backed by highly-trained Western soldiers could shift the fragile political balance in the east African country and spark a bloodbath.

"If a German company now trains and supports a Somali warring faction then it is surely against the interests of the German government," Annette Weber, from the German Institute for International and Security Affairs, told NDR. Several German lawmakers have criticized Asgaard's proposed military involvement in Africa.

"The contract includes wide-ranging tasks and areas of competence: from strategic planning to security to implementation of all measures that are necessary to restore peace and stability," said Asgaard in a press release. The company also provides police and military training and logistics.

Thomas Kaltegaertner, Asgaard managing director and a former master sergeant in the Bundeswehr, told NDR that the Somalia project involved providing armed protection for military, buildings and convoys in the high-risk country. In a statement, Asgaard said it would not act against the interests of the Federal Republic of Germany and would never get into a conflict situation with German armed forces. 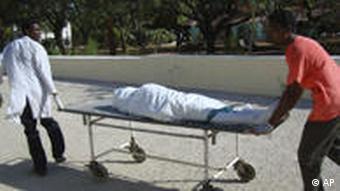 "If worst comes to worst, that a patrol or convoy is attacked, the team will take appropriate action", said Kaltegaertner.

Ninety-nine percent of the personnel are recruited from Germany, he said. The first contingent is reportedly already on its way to Somalia.

The Asgaard deployment would potentially put the German ex-soldiers in direct conflict with the TFG's only protective force, the African Union Mission to Somalia (AMISOM), backed by the United Nations. At a conference in Brussels a year ago, the international community pledged $213 million (172 million euros) to the besieged TFG and AMISOM.

The deal between Asgaard and Darman, a member of the powerful Hawiyes clan in Somalia, is especially explosive because the European Union has been training Somali security forces of the interim government in Uganda. Thirteen Bundeswehr soldiers are also participating in the European Union training mission (EUTM) in Somalia.

Darman told NDR that the German mercenaries would be involved in military combat with his militia against pirates, radical Islamists and terrorists. "The government installed by the international community does not have the backing from the country's population", said Darman.

Darman is currently seeking international support for his bid to become president of Somalia.

The German Foreign Ministry acknowledged that it knew nothing about the contract and the activities of Asgaard Germany Security Group. The Defense Ministry also confirmed that it has never entered into any contractual agreement with the company.

Rainer Stinne, a FDP foreign policy expert, said Asgaard should be made accountable because the contract violated UN sanctions.

A German container ship has been freed from pirates off the coast of Somalia. A Dutch frigate, part of the EU's Atalanta anti-piracy mission, recaptured the ship and arrested the pirates. The crew were unharmed. (05.04.2010)