22.5 million people can be vaccinated in the first stage of a massive anti-swine flu scheme that starts in September. Health and public workers, as well as chronically ill people will get the flu shots first. 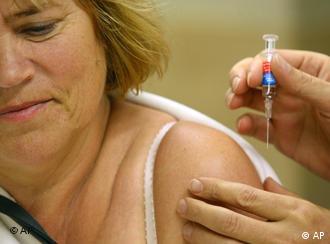 The German health ministry announced on Friday that an estimated quarter of Germany's population will be eligible to receive the flu shots. This confirms reports earlier this week that the government had plans to order 50 million vaccine units against swine flu. The vaccines will be available from September, to coincide with an expected surge in flu cases.

"The vaccinations are a precautionary measure," said health ministry spokesman, Klaus Vater. "No one can tell how the new virus will develop in the coming weeks."

Despite the priority immunization list, Federal Health Minister Ulla Schmidt insists that everyone who wants to be vaccinated against swine flu, will be able to do so. Protecting the entire population is expected to cost health insurers an estimated two billion euros.

Around 800 infections - none fatal - have been reported in Germany. That's the third-highest number in Europe after Britain and Spain.

Berlin has not said when the remaining population can be vaccinated. This largely depends on how fast pharmaceutical companies can produce the vaccine. The World Health Organization (WHO) said up to 4.9 billion doses could be produced in 12 months.

The UN health body has meanwhile announced that it was no longer counting individual cases of swine flu. It said the virus is spreading so fast, it cannot keep up with all the figures and is now asking national health authorities to only report clusters of severe cases, deaths caused by the new virus, or unusual clinical patterns.

German ministers have agreed on further swine flu precautions to tackle an expected surge in the number of infected people in the colder seasons. (14.07.2009)