Members of a newly-formed German political party resulting from the merger of two left-wing groupings called for reviving the social state on Saturday, during their first conference. 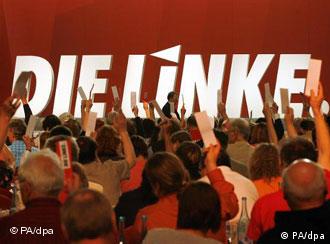 The left joined forces to become The Left

The Party of Democratic Socialism (PDS), which is the successor organization to the East German Communist party, and a group of disgruntled former Social Democrats and trade unionists, known as Electoral Alternative for Work and Justice (WASG), agreed on Saturday to name the new organization The Left.

They elected as co-chairmen Oskar Lafontaine, a former Social Democratic party leader and federal finance minister, and Lothar Bisky from the PDS.

"We are the only party which challenges the (capitalist) system," Lafontaine told delegates. "We want to reintroduce the social state."

Although the party's name is nominally new, traditions and rituals within Germany's Left party will stay the same. The Internationale -- the hymn of the worldwide workers' movement -- as well as the term comrade, with which Left party members still proudly address one another, betray the party's strong roots in the socialist ideology of the previous century. 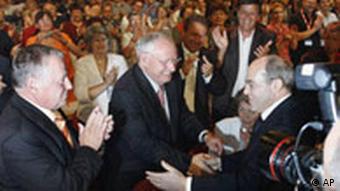 
In the era of globalization, however, the party believes they have a strong cause, seeing as the mainstream Social Democrats here have abandoned socialist policies in favor of what the leftists denounce as blatant neo-liberalism. The SPD's move to the right was the reason many former Social Democrats left the party in recent years -- first to form the WASG, and now the Left party.

The two parties already took part in the 2005 general election under the name The Left and earned 8.7 percent of the vote to become the second-biggest opposition group in parliament.

Even so, the merger wasn't uncontested within the WASG. A group of renegades -- who have now left the party -- argued that the former Eastern German communists of the PDS were power hungry and supported socially unjust policies through coalitions in a number of regional governments. And indeed, the amalgamation appears mainly to be a chance for the PDS to expand into western Germany. For almost two decades it's been unsuccessfully striving for recognition there. 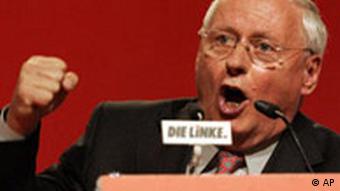 
However, in a regional election in Bremen last month, PDS candidates riding a Left party ticket won their first seats in a western German state legislature.

The Left Party wants to stop the social cutbacks of the current government of conservatives and Social Democrats. It aims to do more for Germany's long-term jobless which have suffered from the reforms initiated by former Chancellor Gerhard Schröder, a Social Democrat. It is strictly against any peacekeeping assignments abroad for the German armed forces and wants to increase taxes for Germany's rich and big corporations.

Lothar Bisky's speech must have been music to some comrades' ears. He said that democratic socialism actually means overcoming the capitalist system in favor of a communist society.

With the G8 summit in Heiligendamm, Germany just round the corner, Attac is booming like never before. But the trend is unlikely to continue on this scale once the meeting is over. (03.06.2007)

The German parliament on Friday decided to slash corporate tax by 9 percent, starting next year. Finance Minister Peer Steinbrück said the move will improve Germany's standing on the global market. (25.05.2007)

A new, far-left German political party, called simply The Left, was recently made official. Some say it could seriously damage the country's ruling center-left Social Democrats. (29.03.2007)