German leaders to meet after May Brexit speech | News and current affairs from Germany and around the world | DW | 17.01.2017

German leaders to meet after May Brexit speech

Top German leaders, including Chancellor Angela Merkel, will meet after British Prime Minister Theresa May confirms that she will seek a "hard" Brexit. The focus will be on strategy for tough upcoming negotiations.

Theresa May comes out in favor of "hard Brexit"

Germany's political elite will come to together on Wednesday to discuss the future now that it has been confirmed that Britain will seek a near complete divorce from the European Union. In a major speechon the so-called Brexit on Tuesday, British Prime Minister Theresa May said that her country would leave the European common market, control immigration from the bloc, withdraw from EU legal jurisdiction and no longer pay "vast sums of money" to Brussels.

In a statement immediately after May's address, German Foreign Minister Frank-Walter Steinmeier of the Social Democrats welcomed the fact that the Prime Minister had "finally brought a bit more clarity on Britain's plans." He also characterized May's statement that Britain wanted a "positive and constructive partnership with a strong EU" as "good."

But he also stressed solidarity among the EU's other 27 members and said no Brexit negotiations would commence just yet.

"Our position remains that negotiation will first begin when Britain officially declares its wish to leave," Steinmeier said. "We will be discussing Germany's position toward the upcoming negotiations in the cabinet's Brexit committee tomorrow. It's in Germany and Europe's interest to strengthen the solidarity of the 27-state European Union and preserve the unity of the European single market."

It will be the first-ever meeting of the committee, which includes Angela Merkel, Vice Chancellor Sigmar Gabriel and several government ministers.

A clean break, no cherry-picking

In her speech in London, May held out the prospect of seeking the "greatest possible access to the single market" and "a bold and ambitious" free trade agreement with the European Union. But she also said it was a priority to trade with other parts of the globe.

"We want to get out into the wider world," said May. She invoked US president-elect Donald Trump's statement that Britain was "not at the back of the queue, but the front of the line" in terms of bilateral trade agreements with America. And she warned the EU against seeking a "punitive" deal allowing Britain to leave the the bloc.

The chairman of Germany's parliamentary committee, conservative Norbert Röttgen, seemed to endorse that idea, although not without a swipe in London's direction.

"We shouldn't play the role of the rebuffed partner and make demands that the people of Britain can't fulfill," Röttgen said in a newspaper interview. "We should be more rational than they are."

But German parliamentarians also emphasize that Britain won't be allowed to pick and choose which parts of the EU it which wants and doesn't want.

"If someone wants a clear break, she should get it," Social Democratic parliamentary leader Thomas Oppermann said in Berlin. "We're prepared to go along with that. But it can't be that anyone picks out individual cherries."

According to a survey carried out by the Cologne Institute of Economic Research published last week, nine-tenths of German companies don't expect serious negative effects from Brexit. Around one-third said the declining value of the pound could have some negative effect on their business.

Ahead of May's speech, the pound declined to a near-record low of under 1.14 against the euro; it was trading at around 1.30 prior to the referendum, and higher still in 2015. The pound's plunge against dollar has been even more precipitous, although the British currency did regain about two percent of its value during May's speech. Surprisingly, one quarter of the 2,900 firms surveyed thought that their business might actually improve if Britain left the EU.

"There seems to be an expectation that if trade restrictions are put in place, then companies that have previously purchased in Britain will look elsewhere," Jürgen Matthes, the economist responsible for the study told Deutsche Welle.

But Matthes also said that a "hard" and "soft" Brexit were not absolute concepts and that the UK could potentially negotiate limited agreements with the EU.

"If they were to conclude a free-trade agreement with significant exemptions from customs duties, that would be relatively free trade, at least with industrial goods." Matthes said. That seems to be what Mrs. May means." 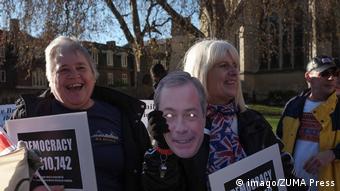 Brexit supports are calling on parliament to invoke Article 50 soon

The British parliament must now vote to formally invoke Article 50 of the Treaty of Lisbon before Britain can leave the bloc. This would set off a negotiating period slated to last two years.

On the European side, any eventual agreement on Britain's exit from the EU has to be approved by a 55 percent majority of member states representing at least 65 percent of the bloc's population. The European Parliament also has to approve any deal.

The remaining 27 member states are set to meet on February 3, 2017 in Malta to discuss the modalities of the Brexit and what the post-Britain EU will look like.

May said that any final deal between the EU and Britain would be put to a vote in both houses of the British parliament for approval.

If the two sides are unable to reach an agreement and the deadline is not extended, all EU treaties with Britain would be automatically nullified - the hardest sort of Brexit.

Theresa May comes out in favor of "hard Brexit"