German intelligence service slammed for destroying files on Nazi past | Germany | News and in-depth reporting from Berlin and beyond | DW | 30.11.2011

German intelligence service slammed for destroying files on Nazi past

Germany's BND foreign intelligence service faces criticism for having shredded files on the Nazi past of some of its employees. A parliamentary committee wants more information on the sensitive matter. 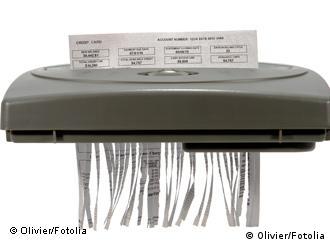 The files were 'not worth archiving'

The German foreign intelligence service BND on Wednesday explained how it had come to destroy personnel files on about 250 employees - some of whom had been former Nazi officials.

A historians' commission researching BND history reported on Tuesday that it had found out that the intelligence service had destroyed the files in 2007.

The agency said in a statement that the files amounted to about two percent of documents that might have been relevant to the commission's work and were regarded at the time as "not worth archiving." From a current point of view, their loss was "lamentable and annoying" all the same, the BND said.

The Bundestag, the lower house of parliament, has demanded clarification of the matter, and summoned the BND to report to the parliamentary committee responsible for Germany's intelligence services.

The commission is made up of four independent historians who had been asked by the BND last year to shine a light into the service's Nazi past.

Commission spokesman Klaus-Dietmar Henke said the documents shredded four years ago included some on spies who had held "significant intelligence positions in the SS or the Gestapo." But he added that the BND had not purposefully destroyed the files of all employees with a Nazi past.

In future, the researchers expect to be consulted before the BND shreds potentially significant historical documents. Henke said he knew the service had destroyed files many decades ago. "But it is alarming that documents of such value were destroyed in 2007," he said.

The security of Germany's new multi-million-euro spying agency headquarters might be compromised; blueprints for the building are missing, allegedly stolen. The government says it's looking for the plans, and answers. (12.07.2011)

Adolf Eichmann, a principal "architect" of the Holocaust, went on trial fifty years ago in Israel. To mark the anniversary, Berlin's Topography of Terror museum explores the unraveling of the leading Nazi organizer. (07.04.2011)

Germany's foreign intelligence agency wants to shed light on its past by opening the books on its many former Nazi employees during the post-war era. A team of historians is to be given this task. (20.01.2011)