Until this week, the possibility of Germany gaining a permanent seat on the UN Security Council looked good. Now, a plan to reform the international organization could put the brakes on that ambition. 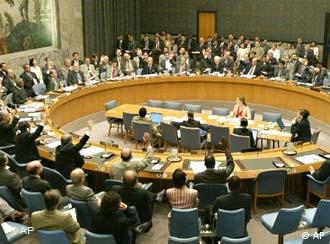 Until this week, the possibility of Germany gaining a permanent seat on the UN Security Council looked good. Now, a plan to reform the international organization could put the brakes on that ambition.

In March, German Chancellor Gerhard Schröder made it perfectly clear that his country hoped to gain a permanent seat on the UN Security Council when he said Germany was ready to "take on more responsibility." A permanent seat would be the culmination of a dream to join the ranks of the world's leading nations born at the time of German reunification in 1990.

The likelihood of achieving that goal was bolstered by UN Secretary General Kofi Annan's intention to make institutional reform one of the top priorities of his time in office. Many thought Germany's hour had come. As the third largest net contributor to the organization and the second largest contributor of troops to UN-mandated missions, Germany, many said, had a right to more of a say.

However, this week rumors of a plan originating from a committee based in Palo Alto, California that was established to propose reforms has dampened hopes -- much to the dismay of German experts and leadership.

According to a report in the Thursday edition of the Süddeutsche Zeitung newspaper, the committee -- whose plans are due to be unveiled at the end of August -- is gearing up to propose a three-tier model: the five current permanent members would remain in the top spot, while countries like Germany and Japan, who for years have been vying for membership in the first league of the international community, would alternately serve five-year terms on the Security Council. The remaining members of the UN would be relegated to the third rung -- two-year stints on the body.

The plan is a "sham" that only scratches the surface of the exceptional position allotted to the permanent members with their veto powers, Professor Berthold Meyer of the Hessen-based Endowment for Peace and Conflict Studies told DW-WORLD.

Manuel Fröhlich of the German Association for the United Nations is was equally critical, calling the three-tier plan a "minimal solution." "This will annoy the majority of the members, including those ambitious countries with an eye on a permanent seat and the rest, who will be relegated to the third league," he says. Fröhlich also predicted that the classic rivalry between German and Italy would not be addressed.

Fröhlich harkened back to the original goal of the reform effort, which was intended to find a way to bestow more legitimacy on decisions by adding geographic diversity to the council. This plan, he said, would relegate the southern hemisphere to the cheap seats, missing the point of reform entirely.

The process of finding a plan all members will agree to is fraught with difficulties. As an alternative to the three-tier model, Meyer favored the transfer of more competency to the General Assembly in instances where the Security Council is at an impasse. Or, said Meyer, a collective EU-seat could be created in the Security Council, though he admited that Britain and France were not likely to trade their individual seats for a collective European one.

Meanwhile, the chancellor has made his views on the three-tier plan perfectly clear. On Wednesday, he simply said, "Germany has the right to a seat."

Germany is lobbying UN member states to support a push for a permanent German UN Security Council seat. But chances for success are limited as only Berlin would benefit from the change. (July 26, 2004)

German Foreign Minister Joschka Fischer wrapped up his 10-day trip to Asia on Friday. Aside from India, his efforts to gain support for a permanent German seat on the UN Security Council met with a lukewarm reception. (July 23, 2004)

Jockeying for a Seat

Talk over reforms have replaced the war in Iraq as the issue du jour at the UN in New York. Germany is also pushing for one of its own: A permanent seat for Berlin on the Security Council. (July 19, 2004)