A school shooting spree last year in Winnenden in which a teenager killed 15 people has prompted a German anti-weapons group to lodge a complaint with the country's constitutional court. 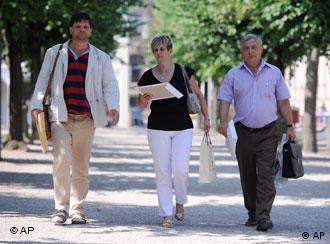 The complainants on their way to the Constitutional Court

The initiative "No murder weapons as sports weapons" has lodged a constitutional complaint with the Federal Constitutional Court in Karlsruhe. Germany's weapons law, the group says, is unconstitutional and does not provide enough protection from killing sprees.

The group argues that the law puts the interests of sport shooters above peoples' right to life and physical integrity. Two of the complainants, Barbara Nalepa and Juri Minasenko, are parents of children who were among the fifteen people killed when a 17-year-old high school student went on a shooting spree in Winnenden in southwestern Germany in March 2009.

After it emerged that the teenager had carried out the attack with a gun he had found in his parents' bedroom, Germany tightened its gun ownership laws. "No murder weapons as sports weapons", however, is fighting for a total ban on sport shooting firearms in Germany.

Hardy Schober's daughter was also killed last year in Winnenden. Schober gave up his job as a financial advisor and founded the "Alliance rampage Winnenden", a group that has expressly not participated in the constitutional complaint. 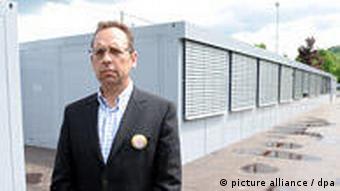 Hardy Schober would prefer an amendment to the existing law

"What good is that supposed to do?" said Schober, whose alliance is also involved with the International Action Network on Small Arms (iansa). "The law was tightened after the Winnenden shooting, and if it were now found unconstitutional, we'd be stuck with an older version."

Instead, the alliance has been campaigning to amend the law rather than tighten it: for instance by introducing biometric safeguards in firearms, a means of identity access control. "That is technically do-able at short notice," Schober said. The alliance has also been urging a strict separation of the storage of firearms and ammunition, as well as a total ban on big bore weapons.

Tightening laws does not increase safety

"Germany has one of the strictest weapons laws worldwide - and it is sufficient," weapons expert Holger Soschinka told Deutsche Welle.

Tightening the law would not lead to a drop in the number of weapons in Germany, Soschinka said. People who legally own a firearm have it stored in a safe 95 percent of the time anyway, he said. "Illegal weapons possession is the main problem." 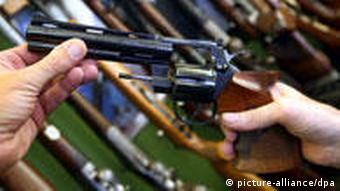 Germany has strict laws on gun possession and storage

"Germany's Police Union and the Federal Criminal Police Office have long been saying that it isn't the legal possession of firearms that poses a problem," he said. "It's illegal possession, because there is no way of controlling that."

"Winnenden was an isolated case"

Kohlheim said sport shooting clubs routinely inform their members about the weapons law and the safe storage of firearms; the DSB's two million members are well-aware of their responsibility, he said. With regard to Wednesday's complaint before the Constitutional Court, Kohlheim said the initiative "No murder weapons as sports weapons" could hardly be taken seriously since it equated sport shooters with murderers.

Sport shooters adhere to the law, he said, although it treats them more harshly than criminals; while authorities usually need a magistrate's search warrant to investigate the property of a criminal suspect, a sport shooter must allow the inspection of his storage facilities without such a warrant.

In the end, Kohlheim concluded, no matter how tight Germany's weapons law might be, it doesn't affect illegal firearms possession: "Most crimes are committed with an illegal weapon."

Father of Winnenden school shooter to go on trial

The father of a 17-year student who killed 15 people and himself in a school rampage in 2009 is to be put on trial. Authorities blame him for failing to secure both the gun and ammunition later used by his son. (06.05.2010)