Greens leader Annalena Baerbock has spoken out in favor of prohibition of polluting practices over a carbon tax as better for the environment and more socially just. To make her case, she points to history. 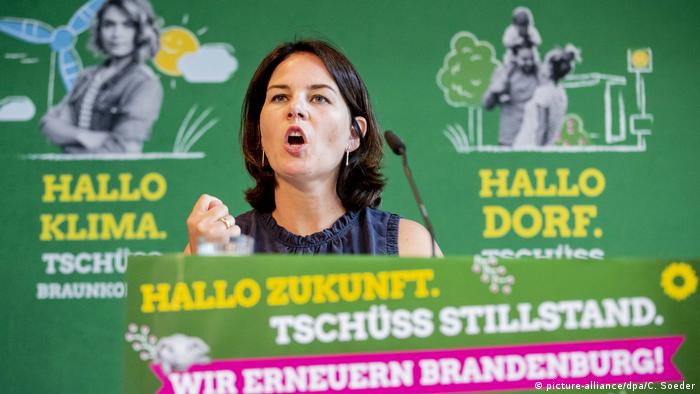 The leader of Germany's Greens, Annalena Baerbock, has called for a greater use of bans as a tool in environmental policy.

"For me, regulations, you could even call them bans, are the main tool," she said in an interview with German radio broadcaster Deutschlandfunk that airs Sunday. "It's also the fairest for society. And it's the instrument that's always helped us with environmental policy."

As an example, she pointed to the banning of asbestos from construction material after it was proven to be a health hazard.

"The idea wasn't 'let's make this a bit more expensive.' It was outlawed," she said. She pointed to the banning of CFCs after the chemicals were proven to be harmful to the ozone layer as another example.

Measures like outlawing the new registration of cars that run on fossil fuels by the year 2030 would be a viable option, she said.

In the interview, Baerbock also criticized the German government's recent climate package — which includes measures that increase the cost of oil, coal and gas — as being too weak as well as socially unjust.

"When they say we're introducing a carbon tax that isn't at all effective as an instrument of climate policy, and that on top is socially unjust because above all it relieves high-income earners, then as a normal citizen I would say that's obviously the wrong approach and the government doesn't know what it's doing," said Baerbock.

Baerbock characterized the fight against climate change as the most pressing political topic of the time.

"Every generation has its own duty to its time period and ours is to get the climate crisis under control," she said.

How Germany can halve carbon emissions