The deutschmark was introduced as the official currency of East Germany on July 1, 1990, replacing the East German mark and paving the way for unification three months later. 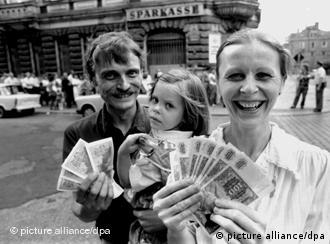 Many East Germans were happy to adopt the D-Mark

By spring 1990, East Germans were once again taking to the streets, the "We are the People" slogan of the peaceful revolution of autumn 1989 replaced by another: "If the deutschmark doesn't come to us, we will go to the deutschmark!"

It was no empty threat. Since the fall of the Berlin Wall on November 9, 1989, hundreds of thousands had emigrated to the West, and the leadership of both Germanies were forced to make some speedy decisions.

Looking back, West Germany's then Finance Minister Theo Waigel said their options were limited. "I don't think we would have managed to make people stay in the East," he told DW. "We'd have seen a mass exodus. Some four million people had gone west after 1949 and again after 1989. We had no time to lose." 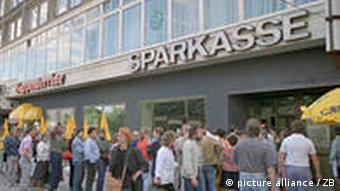 Monetary union was pushed through without further ado, despite some reservations at the Bundesbank. On July 1, 1990, at the stroke of midnight, people gathered outside the banks to stand in line to exchange their East German marks for the long awaited hard currency.

An average of 4,000 marks was exchanged per person at an exchange rate of 1 to 1. Until then, they had been exchanging up to 11 East German marks for one deutschmark on the black market.

Moreover, pensions, wages and savings of up to 6,000 East German marks were exchanged overnight on the same one-to-one basis.

The switch was welcomed by private citizens, even though many were aware that the exchange rate hardly reflected the economic reality.

"I thought it was unfortunate that it wasn't more considered," said Ernst Woll, a vet who lived in Erfurt and was approaching retirement in 1990. He was skeptical of the German-German monetary union.

"Many people in the former East Germany were a bit misty-eyed about West Germany, and especially its currency," he recalls.

But by then, it was obvious there was no going back.

Like everyone else, East Germany's politicians found it hard getting used to the new currency.

"It was strange paying for everyday items with western money," remembers Gregor Gysi, who was chairman of the Party of Democratic Socialism (PDS) at the time. "We would save our deutschmarks for something special. We didn't spend them on bread rolls or gas or a cup of coffee."

Wilfried Fuhrmann is a monetary expert and economist at Potsdam University and witnessed the introduction of the deutschmark in East Germany first-hand. He soon realized the new currency wouldn't only bring buying power - but also huge economic problems.

"The biggest problem was people's hopes and expectations," he says. "The public should have been told that they were starting at a relatively low level and that when productivity was increased, they would start to see improvements. The mistake was to try and match the standard of living in the West as quickly as possible."

What happened was that East Germans went on a huge spending spree. At long last, they were free to travel to the West and to buy western products. They left East German goods on the shelves, and never looked back. The effect on the economy was devastating.

East German manufacturers lost almost all their customers overnight - and competitors from the West weren't the only problem.

"Because wages were now paid in deutschmarks it meant East German products were no longer so cheap," explained Wilfried Fuhrmann. "That meant that companies lost out to the competition from the West."

The losers of the currency union 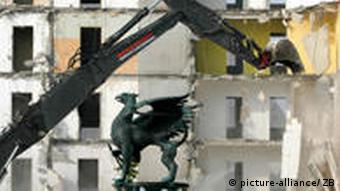 Eastern Germany is still lagging behind the western states

Many of the run-down East German companies collapsed. The government privatization agency Treuhand was set up, aiming to privatize state-run companies. But factory closures and high unemployment sparked a political dispute that remains unresolved to this day.

"The Treuhand made arbitrary decisions," said Gregor Gysi. "The agency decided which companies received help and which didn't. They looked for buyers for some firms and ignored others. I once asked the Treuhand president which criteria they used, and she couldn't give me an answer."

Theo Waigel, the former German finance minister, says that only the fittest survived.

"We gave capital to the companies with viable prospects so that they could restructure," he said. "But it was down to the companies themselves to find the buyers and the international market share to be able to survive."

Many simply went under, and 20 years on, eastern Germany is still waiting for the economic upswing which the currency union was designed to trigger.

On April 5, 1990, 400 representatives entered the chamber of the Palace of the Republic in East Berlin. They were the first parliamentarians to have come to power in free and fair elections. (04.04.2010)

On October 7, 1949, delegates of the so-called people's council enthusiastically created communist East Germany. It took 40 years before the Berlin Wall fell and Germany was reunited. (07.10.2009)