Germany’s foreign minister has met with the US ambassador over allegations that an American spy agency has been tapping into Chancellor Angela Merkel’s mobile phone. Merkel is also facing criticism from the opposition. 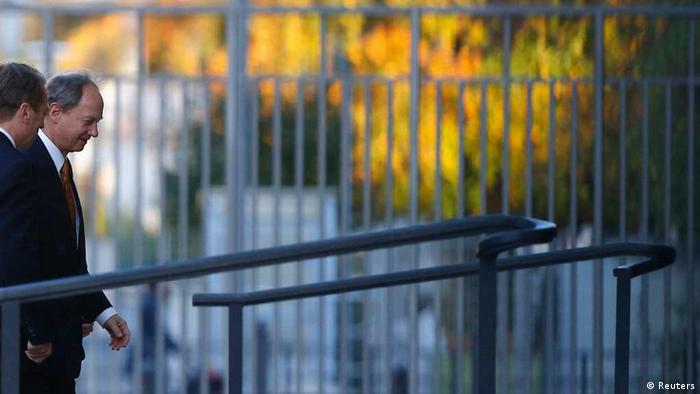 Foreign Minister Guido Westerwelle on Thursday met America's ambassador to Germany, John B. Emerson, for a personal meeting to discuss allegations that the US National Security Agency (NSA) was tapping into Chancellor Merkel's cell phone.

"For us, spying on close friends and partners is totally unacceptable. This undermines trust and this can harm our friendship," he told reporters after the meeting.

"We need the truth now."

This comes a day after the allegations were first reported by the German newsmagazine Der Spiegel. Shortly afterwards, the chancellor called US President Barack Obama to demand an explanation.

Merkel also commented on the allegations before attending Thursday's European Union summit in Brussels, saying "trust needs to be re-established" in relations with Washington.

"The US is not monitoring and will not monitor communications of the chancellor," spokesman Jay Carney said. However, he did not say whether or not she had been spied on in the past.

Speaking to ARD public television on Thursday, German Defense Minister Thomas de Maiziere said it would be "really bad" if the allegations, which were first published by the news magazine Der Spiegel proved to be true.

"We can't simply return to business as usual," he added.

At the same time though, he stressed that "the relations between our countries are stable and important for our future; they will remain that way."

Meanwhile, the chancellor is also facing criticism over her government's handling of previous allegations of spying by the NSA.

"The report that the chancellor's mobile phone was also tapped shows how absurd the attempt was to end the debate about the surveillance of everyday communications in this country," Germany's commissioner for data protection and freedom of information, Peter Schaar, told the regional daily Mittelbayrische Zeitung.

"In light of the new revelations it was downright irresponsible not to have pushed harder to get to the truth," behind the allegations, Schaar added.

Schaar was referring to a statement issued by the head of the chancellery, Ronald Pofalla, back in August, when he publicly declared the controversy over alleged NSA spying activities in Germany to be over. The chancellor herself later made a similar statement in an interview with ZDF public television.

Anton Hofreiter, parliamentary floor leader of the Green Party, said the chancellor needed to put her cards on the table.

"Mrs. Merkel must make public what she knew and when," Hofreiter told the Passauer Neue Presse.