Werder Bremen's head coach has resigned as an investigation is launched into allegations of a fake COVID-19 vaccine certificate. 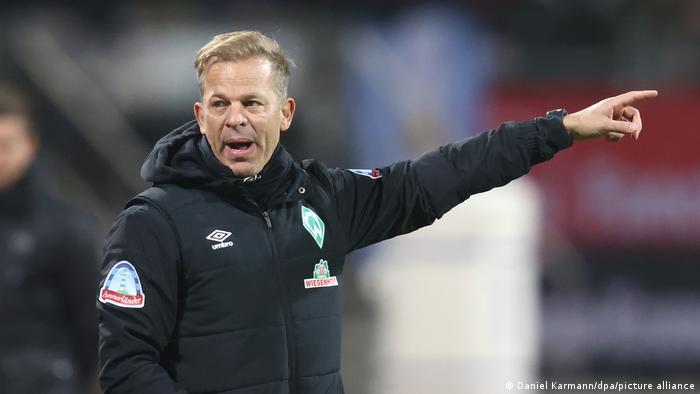 It comes as the office of the public prosecutor began an investigation into the alleged use of a fake COVID-19 vaccination certificate.

In a statement released on the football team's website, Anfang said: "Because of the extreme stress caused to the club, the team, my family and myself, I have decided to immediately step own from my role as head coach of Werder Bremen."

Assistant coach Florian Junge announced he too would be leaving the club.

On Friday, the Bremen prosecutors' office confirmed it was investigating claims that both members of the coaching staff used fake COVID-19 vaccine documentation after the city's health office filed a criminal complaint.

Late on Thursday, Anfang claimed that he had received both vaccinations. "I received both of my vaccinations in an official vaccination center and got the documents to prove it," Anfang said in a statement. "I very much hope that this matter will soon be cleared up."

The club had initially moved to state Anfang's innocence and released a statement on its website, which appears to have since been removed.

In the club's latest statement, manager Frank Baumann said the two coaches had taken responsibility and the club was now looking for a new head coach.

"Markus and Florian are taking responsibility with their step and are helping to end the unrest that has arisen around the club and the team in recent days. We respect their decision and will now start looking for a new head coach," Baumann said.

The debacle involving senior coaching staff is not the only challenge facing the football club. The teams head of scouting and professional football, Clemens Fritz, has tested positive for COVID-19.

The club confirmed that Fritz, who himself was once a pro-footballer, had tested positive for the coronavirus. The club said he had not experienced any symptoms.

Fritz was also understood to be the only individual affected by quarantine.

“We informed the coaching staff and the team about the new situation this morning ahead of training. We have complete faith that Danjiel will be able to successfully prepare them for tonight’s game,” said club manager Baumann.

U19 head coach Christian Brand step up  as Zenkovic’s assistant coach for the match.