As Germany tries to attract engineers and other skilled workers from abroad, German courses have become popular. But many don't stay, as they often end up in isolated spots with few chances of promotion. 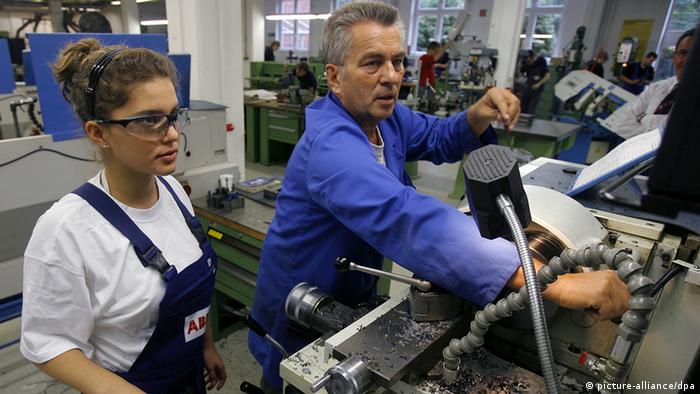 Christoph Mücher had almost gotten used to the dwindling numbers of students signing up for the German courses he had been teaching at the Goethe Institute for the last 20 years.

Mücher, who is now the institute's press officer, has seen many people sign up who maybe wanted to read Thomas Mann in the original or simply saw learning languages as a hobby.

Two years ago, it all changed. When he was in Portugal a few days ago, Mücher met students tackling German grammar with vigor and determination., with very few people not finishing the course.

"I have never seen students so enormously motivated," he said.

The economic crisis in southern Europe has forced many people to look for work abroad, with young people particularly affected. There has been a 60-percent rise in the number of people signing up for the Goethe Institute's German language courses in Spain alone. The numbers in Portugal are similar.

It has prompted Mücher and his colleagues to adjust their curriculum to accommodate engineers, doctors and nurses looking to learn German. In Greece, there are even discounts for the unemployed, if they attend classes during the day.

Christina Ramb from Germany's Federal Employers' Federation (BDA) estimates that Germany will lack four million skilled workers by 2030. There is already a shortage of doctors and care workers for the elderly as well as engineers and IT specialists.

Ramb says to meet demand, there has to be a two-pronged strategy - firms need to attract workers from abroad and attract more women and older workers.

Ramb believes the government is "on the right track." Easing restrictions for skilled migrants over the last few years had made it a lot easier for those people to qualify for jobs in Germany, according to Ramb.

The government has also set up websites giving workers from abroad hints and tips on how to get a visa. It has also stepped up efforts to get young people into training in Germany. Germany's Federal Labor Office has recently signed an agreement with Bosnia-Herzegovina and the Philippines to attract care workers.

There is also a "gigantic project in India" aiming to establish German as a foreign language in Indian state schools. The Goethe Institute is now tasked with training teachers at 1,000 schools there. Mücher hopes that around one million students will learn about Germany that way and will favor Germany over the US once they have trained as IT specialists or doctors.

It is not clear how many qualified workers have come to Germany in the last few years. In June 2012, the Labor Office registered 2.2 million foreign workers, compared with 2.1 million in 2011. Many of those could, however, be people commuting across borders on a daily basis. 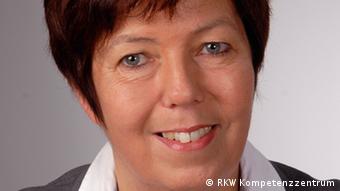 Heitzer-Priem says many of the skilled workers are leaving Germany

The Labor Office says it helped almost 700 jobseekers - most of them from southern Europe - find work so far this year. There are also numerous private agencies specializing in finding skilled workers for German firms despite the fact that it is still often hard for migrants to work in Germany if they do not have a German degree or qualification.

It is also not clear how many of those actually stay in Germany. "The feedback we're getting is that there are already lots of workers going back home," says Ulrike Heitzer-Priem from the Skilled Workers' Task Force, which is part of the German Economics Ministry, without divulging exact figures.

'Out in the sticks'

The task force helps small-and medium-sized businesses find highly qualified workers. She says many companies cannot communicate with foreign workers, as the only language spoken there is German.

Another problem is the location of many companies desperately seeking skilled workers - engineers from big cities like Barcelona and Lisbon often end up in the countryside "out in the sticks," as Heitzer-Priem puts it - where it is harder for them to settle in.

She is also convinced that too many managers in Germany still have what she calls a "guest worker syndrome."

"They have to get used to helping the foreign employees find their feet, so they can fully integrate," she says, even if it just small things like helping them fill in forms or find the local football club.

But even highly-qualified, university-educated workers often go back home or move to another country, according to Ellen Bommersheim from Kompass, a regional initiative advising start-ups in the state of Hesse.

The main reason, says Bommersheim, was the "glass ceiling" that still excludes foreign workers from top management positions. Many therefore go to developing countries, for example in North Africa, where the economy is growing with plenty of opportunities for entrepreneurs.