When ecstatic East Germans crossed the newly opened border to the west in 1989, few thought the cars they were driving would become iconic cars. But the Trabant became a symbol of those times and is set for a relaunch. 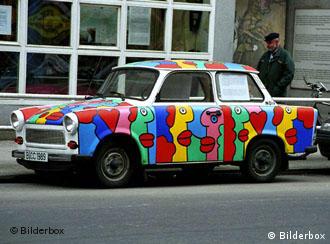 A number of classic car designs have had revamps in the last few years and have gone on to have even more success and inspire a new generation of fans. Taking a leaf out of this particular book, a Bavarian company is hoping to give the Trabant, the iconic two-cylinder crate which became a symbol of German reunification, a new lease of life.

"There's been a new Beetle, a new Mini, it's time for a new Trabi," Daniel Stiegler, the press spokesman of Herpa, a company more used to building miniature cars than life-size ones, told Reuters. "The reception to our idea has been fantastic."

Formerly known as "the spark plug with a roof," the Trabant was most common vehicle in the former East Germany and enjoyed three decades of manufacture with a barely a tweak to the original, cramped design. This was mainly due to new designs proposed to replace it being rejected by the East German leadership on grounds of cost. 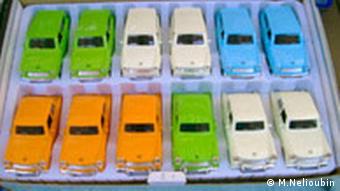 The new Trabis will be much larger than these

Despite having marginally more power than a scooter and only a little more passenger room, the Trabi was a much sought-after vehicle in the communist east and people could wait for years before receiving one of the boxy cars. The car became an icon of reunification in November 1989 when the Berlin Wall fell after East Germans were filmed crossing the newly opened border to the west crammed into their Trabants.

Now Herpa, who bought the rights to the name, wants to capitalize on the continuing trend of "Ostalgia" -- the passion for all things GDR -- and the soft spot the car continues to have in many people’s hearts by making a new Trabi version that retains the original's iconic design.

Gone will be the tiny engine, noxious fumes and plastic body, the new Trabi will house a BMW-designed engine but will keep the two-door, four-seat arrangement, along with its once omnipresent sky-blue color, although Herpa is not ruling out more color choices than were originally available. 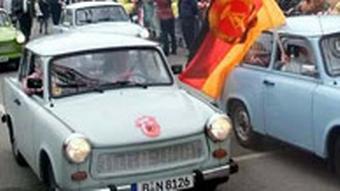 The Trabant became a symbol of unification

As befitting a model manufacturer, Herpa will unveil the new Trabi design in 1:10 scale model form at International Motor Show in Frankfurt next week. The reaction to the model will influence how many of the new Trabant’s the company will make.

"A limited run of 5,000 is the mostly likely option," said Stiegler. "We are in talks with several manufacturers".

The new Trabi is unlikely to be as cheap as the original model. Ostalgia and Trabi fans are currently paying around 10,000 euros for restored originals on Internet auctions site. The new revamped Trabi is likely to cost about five times as much.

Looking like a cross between a golf cart and an amusement park bumper car, the Trabant -- a sluggish two-cylinder vehicle from East Germany -- was arguably the most venerated object of desire behind the Iron Curtain. (19.05.2007)

Nearly 50 years after the first model rolled off the production lines, the car that became a symbol of East Germany can still be seen pottering along German roads. (15.10.2006)