Opposition leaders want German Education Minister Annette Schavan to resign after her doctorate was revoked. The plagiarism controversy poses a challenge to Chancellor Angela Merkel ahead of general elections this fall. 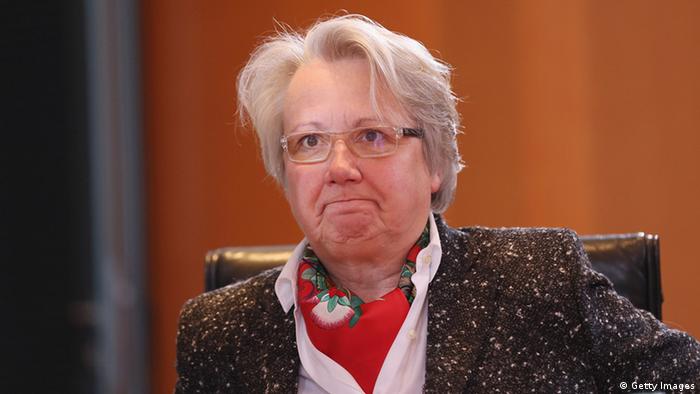 The general secretary of the opposition Social Democrats told the Wednesday edition of Germany's Die Welt newspaper that Schavan was no longer a credible education minister.

"She must draw the necessary conclusions," Andrea Nahles said. "The standards must apply to everyone - regardless of the person."

On Tuesday a faculty council of the University of Düsseldorf's philosophy department voted to strip Schavan of her doctorate. The council said it had found proof the education minister had "systematically and deliberately" presented intellectual efforts in her 1980 dissertation, entitled "Character and Conscience," that she herself had not generated.

The plagiarism charges against Schavan, a member of Chancellor Angela Merkel's conservative Christian Democrats (CDU) and one of her closest allies, also included her failure to properly cite sources.

Steffi Lemke of the Green Party, said Tuesday evening in Berlin that the faculty council in Düsseldorf was quick to point out that she thought that ruling Schavan's dissertation was invalid was a serious blow to her integrity. "And I just cannot for the life of me imagine how an education minister wants to serve in Germany with such a stigma," said Lemke.

Chancellor Merkel has been supportive of Schavan over the past weeks.

While she has not commented on the latest developments, Michael Kretschmer, the head of the CDU/CSU parliamentary faction, has defended the education minister. "The action of the university is a farce," he said. "It was an unfair procedure from the beginning that was continuously carried out with targeted reputational indiscretions."

Speaking Wednesday while on a visit to South Africa, Schavan rejected calls for her resignation, saying "she will not accept" the university's decision and would take legal action against it.

An investigation into Schavan began last May when an anonymous source posted allegations online. In October, German news magazine Der Spiegel published a report that indicated a university-appointed expert had found evidence of plagiarism in passages on 60 of the 351 pages of her dissertation.

Schavan has refuted the charges, but admitted early this year that her work could have diverged from standard citation rules. She has one month to appeal the ruling.

The controversy could negatively impact Merkel ahead of this fall's national elections.

Schavan, 57, is now the second member of Merkel's cabinet involved in a plagiarism controversy. Then-defense minister Karl-Theodor zu Guttenberg resigned in early 2011 after losing his doctorate from the University of Bayreuth for similar reasons.

Back then Schavan was one of the first to condemn Guttenberg for plagiarizing his doctoral thesis, calling it "shameful."