German defense minister accused of plagiarism in his Ph.D. thesis | Germany | News and in-depth reporting from Berlin and beyond | DW | 17.02.2011

Colleagues of German defense Minister Karl-Theodor zu Guttenberg have rallied to his defense over plagiarism claims. Guttenberg, one Germany's most popular politicians, is accused of copying in his doctoral thesis. 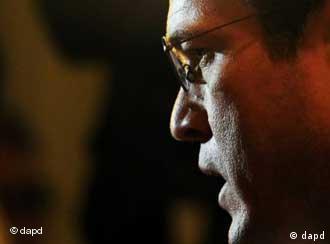 Guttenberg remains calm in the face of the accusations

German Defense Minister Karl-Theodor zu Guttenberg will soon have to defend himself against accusations of "brazen plagiarism" and "deceit" in several passages of his 2006 doctoral thesis.

The University of Bayreuth, where Guttenberg completed a doctorate in law, has formed a committee to investigate the claims and has delivered the minister an ultimatum that he must state his position within two weeks.

Guttenberg stands accused of copying at least 13 authors without crediting his sources. The claims were first levied by Bremen law professor Andreas Fischer-Lescano, who told the Süddeutsche Zeitung newspaper that passages of the minister's paper were almost identical to previously published texts by other authors.

The national daily Frankfurter Allgemeine Zeitung charged Guttenberg in particular with failing to cite quotes by political scientist Barbara Zehnpfennig, who taught at the University of the German Armed Forces at the time. 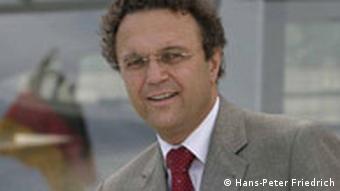 Friedrich claimed the allegations were malevolent

The website of news magazine Spiegel added that Guttenberg had failed to footnote a paragraph taken from the US embassy's website.

Meanwhile, Political allies of Guttenberg have dismissed the allegations as a smear campaign, calculated to damage a rising star tipped as a future party leader of Bavaria's Christian Social Union (CSU).

The claims were branded "a political dirty trick" and an "attack from the left" by the head of the lower-house parliamentary group of Bavaria's Christian Social Union (CSU), Hans-Peter Friedrich.

"The accusations against the defense minister are a politically motivated attack from the left. It is all about damaging a successful politician personally," said Friedrich in defense of his party colleague on Wednesday.

Chancellor Angela Merkel said she was confident the matter would be resolved. "I think that the defense minister and the University of Bayreuth will clear things up," she told German public radio.

German Foreign Minister Guido Westerwelle rebuffed reporters' questions on the matter, saying he would not "give comment on dissertations or high school diplomas."

Opponents of Guttenberg have said that, should the allegations prove true, he should resign from his post. 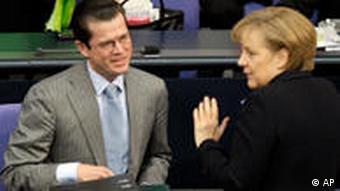 The issue has been referred to an ombudsman at the University of Bayreuth, where Guttenberg received top marks for his thesis.

Guttenberg has called the accusation "absurd," saying he wrote the 475-page thesis, which drew legal comparisons between the United States and the European Union, "to the best of his knowledge and belief," but he did not rule out minor mistakes when quoting sources.

After rising rapidly through the ranks of the Bavarian Christian Social Union (CSU), the telegenic politician became defense minister in Chancellor Angela Merkel's center-right government after the 2009 election.

If the allegations against Guttenberg are substantiated, the University of Bayreuth could either issue a warning, mark down the thesis or, in the worst-case scenario, take away Guttenberg's Ph.D. altogether.

Military ombudsman Hellmut Königshaus has said the German army needs to make big changes in training and leadership, citing inappropriate behavior. The comments come as the military deals with a string of scandals. (25.01.2011)

The German press are feasting on the troubles of the Christian Democrats' popular Defense Minister Karl-Theodor zu Guttenberg as a series of mistakes tarnishes his reputation. (24.01.2011)