German Cup: Wolfsburg crowned again as Frankfurt push them to their limit

Wolfsburg are German Cup winners for the seventh straight year, but they did it the hard way versus Eintracht Frankfurt. Wolfsburg clinched it following a red card for their goalkeeper and just as a shootout was looming. 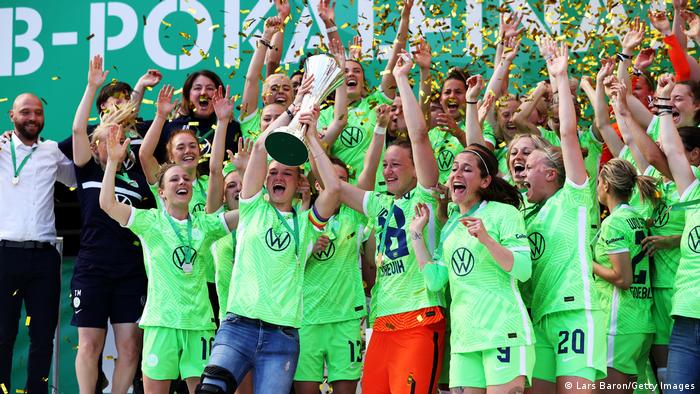 After 120 minutes of energy-sapping and emotionally draining football, Frankfurt's agony was as intense as Wolfsburg's ecstasy. The team that has made this competition their own in recent years, staggered to a seventh straight crown — but Frankfurt took it to the wire.

Having seen Bayern Munich overtake them in the league and the likes of Barcelona and Chelsea in Europe, there was a lot on the line for Wolfsburg here. This was a game to prove that they aren't a spent force and that their semi-final victory over the rising force of Bayern Munich wasn't a one-off. Just as much as Wolfsburg were desperate not to lose, their opponents tried desperately to show they were good enough to win.

That made for a tense afternoon in the early summer sun in Cologne. Wolfsburg went into their penultimate game of the season threadbare with injuries — most notably to talismanic striker Alexandra Popp – and while they dominated the game they couldn't create anything clear cut. Frankfurt also struggled in front of goal, with their energy used up defending. The closest either side came was Wolfsburg's Fridolina Rolfö fluking a shot against the post in stoppage time.

Still without a goal, the game headed into extra time — as it has last season when Wolfsburg eventually edged out Essen in a shootout. But the game took a twist when Wolfsburg keeper Almuth Schult was shown a straight red card for a foul on Lara Prasnikar, who was clean through and seemed certain to score for Frankfurt. Schult had taken one for the team. 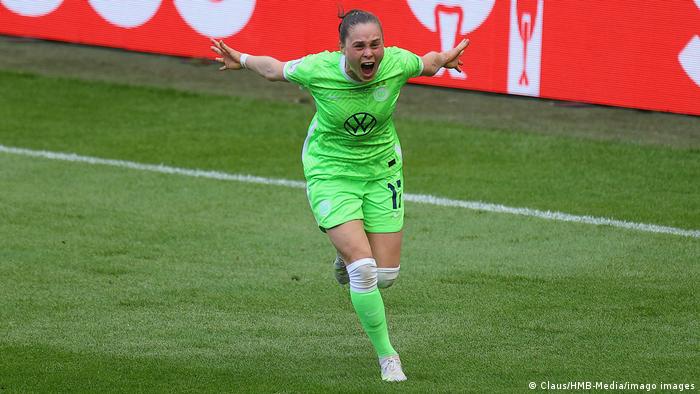 Ewa Pajor's winner for Wolfsburg was the first moment of attacking quality they had produced.

Chances came and went for both sides in what had been a surprisingly open game, despite the scoreline. As the clock ticked into the 118th minute and a penalty shootout loomed large, Wolfsburg produced the game's first moment of quality in front of goal. Ewa Pajor found a pocket of space on the edge of the box and drilled a low shot into the bottom corner.

As Pajor ran to celebrate with the Wolfsburg substitutes, Frankfurt's players dropped to their knees. They knew that 118 minutes of blood, sweat and tears had ultimately been in vain. Wolfsburg spared themselves a shootout and with an eighth German Cup crown under their belts, Frankfurt's record of nine is now within view.

A rampant Barcelona side proved unstoppable in the Women's Champions League final. The Spanish side won 4-0 to claim the trophy for the first time and suggest they are the team to challenge Lyon's dominance long term.