Eintracht Frankfurt have booked their place in the final of the German Cup after a penalty shootout win over Borussia Mönchengladbach. Frankfurt will face Bayern Munich or Borussia Dortmund in the May 27 showpiece. 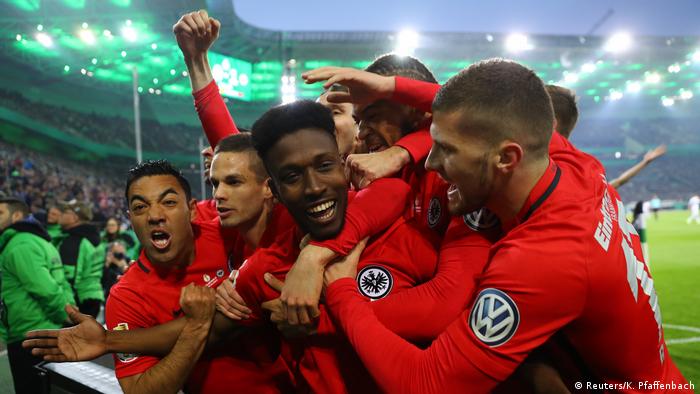 It may have taken 120 minutes plus the drama of 16 penalties, but Frankfurt have made their first German Cup final since 2006 – with Branimir Hrgota’s penalty sealing victory at the end of a long night in Mönchengladbach.

Before the game, Frankfurt coach Niko Kovac spoke of the club having a chance to “write history” as it seeks its first major silverware since they last won the same competition in 1988.

Whoever prevails in the second semifinal when Germany’s most famous two clubs meet at the Allianz Arena on Wednesday is irrelevant for now; the prestige of reaching the final is something Frankfurt could have barely imagined 12 months ago when Kovac was in the process of steering the club clear of relegation in the Bundesliga. Now they stand on the cusp of qualification for Europe, either through the league or the Cup.

Frankfurt started the game at breakneck speed, with wave after wave of attacks in the opening minutes pinning the home side back. Gladbach couldn’t deal with the visitors’ direct approach, which saw the excellent Marco Fabian and Hrgota both going close inside the opening three minutes.

The hosts failed to heed the warning and, after 15 minutes of being run ragged at the back, they conceded the opening goal. Frankfurt’s American attacker Timothy Chandler raced down the right flank and his cross found its way to Taleb Tawatha on the far side, and the Israeli barely broke stride as he lashed a fine first time shot into the back of the net. 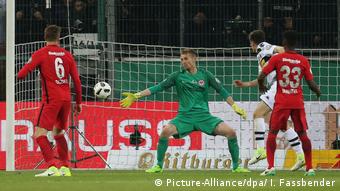 Hofmann's strike on the stroke of halftime drew Gladbach level.

Gladbach, who were missing several key players through injury, managed to steady the ship, but struggled to create any chances to reward their possession. They came close with an almost extraordinary goal by Jonas Hofmann, who helped on Yann Sommer’s punt downfield and, with Lukas Hradecky well out of his goal, Hofmann could only watch as the ball trickled centimeters wide.

Hofmann’s moment was to come a few minutes later though, seconds before halftime. Despite a hint of offside, he tucked Ibrahima Traore’s cross in from close range, with the foot of Frankfurt captain David Abraham’s just about keeping Hofmann onside.

With both sets of players tiring, the rest of the game was an unremarkable affair, as it drifted with a sense of inevitability towards extra time and then penalties. The tension was rising as both sides successfully dispatched their first six penalties. Both sides missed their seventh spot kicks and Gladbach missed their eighth, allowing Hrgota to step up and seal Frankfurt’s place in the final.

Frankfurt will go into the final as definite underdogs, but merely making it this far demonstrates the club’s upward trajectory and, who knows, they may even write a little more history in Berlin next month.