A sculpture of a crucified frog by a late German artist, on display at modern art museum in Italy, has caused a stir among Catholics in the country. 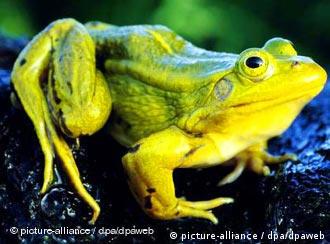 Unlike this one, Kippenberger's frog is holding a beer mug and an egg

The work by Martin Kippenberger shows a green frog on a cross, with a mug of beer on one side and an egg on the other. It stands about one meter (3 feet) high.

"We've decided that a leaflet about this work will be distributed to all visitors to explain its artistic value," a spokesman at the museum in north-eastern Balzano, where the statue is on display, told AFP news agency.

The regional governor in the South Tyrolean area, Luis Durnwalder, told "Suedtirol Online" that the exhibit was "lacking respect and taste."

"Someone has to be touched in the head to make something like that," added Durnwalder.

According to Italian press, curators have said the work is a self-portrait of the artist "in a profound state of crisis." It was created in 1990 under the original title "Feet First."

Kippenberger had recently undergone treatment for a drug and alcohol addition. The artist died in 1997 at the age of 44.

German artist Gregor Schneider's plan to feature a dying or recently dead person in an exhibition about the "beauty of death" has been panned by critics who say he's going too far. (22.04.2008)

A controversial exhibit by Danish artists in Berlin is set to reopen Tuesday, March 4. It had been closed after Muslim groups threatened violence if a work depicting Mecca wasn't removed from the show. (04.03.2008)