German court rules against bid to block Greece aid | Germany | News and in-depth reporting from Berlin and beyond | DW | 08.05.2010

A group of euroskeptics has failed in its legal effort to block German financial aid for Greece. Germany's highest court ruled against the appeal on Saturday. 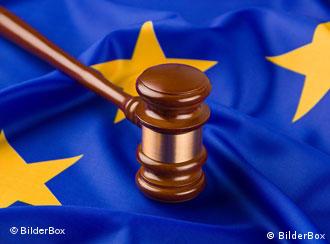 Germany's highest court on Saturday rejected a request by a group of academics to block the immediate release of Berlin's multi-billion-euro loan to debt-stricken Greece.

A group of four lawyers and one businessman had argued that the financial rescue package broke German constitutional law, that it was not provided for under European Union treaties and that it would lead to policies that cause inflation.

They lodged their appeal in the hope that the court would halt the flow of funds while the case was being considered.

The court rejected their request, arguing that there was insufficient evidence that the property rights under the German constitution would be severely and irreversibly altered.

"The complainants did not present concrete evidence that their rights, in particular as regards article 14 (on property rights) of the basic law (constitution), would be severely and irreversibly affected as a result of the guaranteed loan," the court said in a statement.

Court to give ruling later

A court spokeswoman said it was still to decide on a parallel challenge to the legality of the aid but that this was unlikely to take place before the funds were released to Greece.

In 1998, the four lawyers - known as the "euro rebels" - failed in a legal challenge to prevent Germany from entering the single European currency.

Despite widespread resistance to the aid plan, German Chancellor Angela Merkel said earlier this week that Europe's future was dependent on its approval.

The German parliament has approved the country's contribution to a European Union aid deal for debt-laden Greece. The Bundesrat upper house has also approved the multi-billion pound rescue package. (07.05.2010)