German Court: Muslim Students Must Swim | Germany| News and in-depth reporting from Berlin and beyond | DW | 01.06.2005

The administrative court of Düsseldorf dismissed a complaint brought by two Muslim parents from Wuppertal who wanted to keep their son out of a co-ed school swimming class in a landmark case. 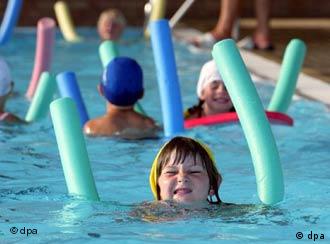 Muslim students will have to join in

The deeply religious Muslim parents of the 11-year-old student were trying to prevent their son from attending swimming classes, where he would mix with girls in bathing suits. They filed a complaint in a Düsseldorf court against school officials. But the court rejected their case, saying that religious beliefs are not a reason to prevent children from attending swimming classes and said that the boy must attend them in the future.

It was not easy for the court to reach such a decision, Chief Judge Uwe Sievers said during the proceedings.

"Religious convictions stand, in this case, against the duty of the school," he said. "But it is not the task of this court to challenge the Quran. Instead, we have to try to reconcile both interests." 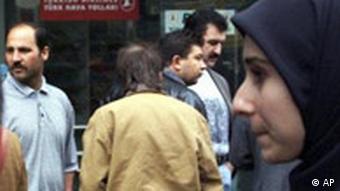 Initially, the parents had repeatedly requested that their son be excused from school swimming lessons that both boy and girls took part in. They called such activities "a dangerous influence on the emotional world of young people." The Quran dictates that children over the age of 10 should be segregated by gender.

In the swimming pool, the young boy couldn't help avoid seeing his female classmates, scantily clad in their bathing suits. That is "an unacceptable sight," the complainants' lawyer told the Westdeutsche Zeitung. She said the dismissal of the complaint was tantamount to allowing the local government to interfere in the rights of parents to raise their children.

The suggestion by the parents for girls and boys to receive separate swimming lessons was rejected for "organizational reasons." Judges instead said that separate changing rooms should suffice.

"Besides, we live in a western society in which we don't live by the rules of the Quran," they said during the proceedings. "And as on the street, the youngster can close his eyes to the girls...or wear long swimming trunks."

Not the first such case

The case is an example of continuing conflicts between very religious Muslims parents and sports and sex education classes. Berlin and other cities with a high number of immigrants from Muslim countries report that an increasing number of parents keep their children from sports activities, biology classes and field trips out of religious reasons.

Berlin officials have said that they have received seven applications from parents asking that their children be exempt from swimming lessons and 18 from sex education classes this year, of which they granted three. Similarly, Hamburg officials denied a request from a Muslim mother to keep her two teenage daughters out of sex education classes. They argued that it is the duty of the school system to teach biology.

Immigration reformers in Germany need look no further than their next-door neighbor. Progressive policies in immigration and integration have long been the norm in Holland, and Germany is starting to take notice. (June 24, 2002)

Following the publication of a survey that says many migrant girls are circumcised in Germany, UNICEF and other groups are pushing for measures to counter the problem. The emphasis is on information rather than bans. (April 8, 2005)

“The decisive thing is not what’s on the head, but what’s in it,” says a group of prominent German women who have launched a campaign against the government’s headscarf ban for Muslim teachers. (Dec. 2, 2003)