German Chancellor Angela Merkel's Christian Democratic Union (CDU) said Monday it had surpassed the rival Social Democratic Party (SPD) on the basis of membership figures for the first time since being founded in 1945. 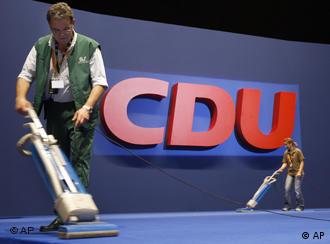 The CDU has cleaned up when it comes to membership

According to figures from the end of last month, the SPD, Germany's oldest political formation, had 529,994 members.

Both parties have been losing members for years, although this has been taking place more rapidly in the SPD. At the end of May, the SPD still had 531,740 members, by comparison with 531,300 for the CDU.

Comparing the two parties is not strictly fair to the CDU, which does not campaign in Germany's largest state, Bavaria. It leaves the field free in the southern state for its sister-party, the Christian Social Union (CSU).

At the end of last year, the CSU, which has long dominated Bavarian politics, had around 167,500 members. Like the CDU, the CSU was founded in 1945, immediately after the end of World War II.

The SPD, formed out of the 19th century trade union movement, has existed since the 1860s, taking its current name in 1890.

Every German citizen should have the right to vote in national elections, even those under the age of 18, says a group of parliamentarians. They've proposed a law that would allow parents to vote for their children. (09.07.2008)

Newspaper headlines on Wednesday, June 4, made for disturbing reading for Germany's Social Democrats. Their support has dropped to a historic nadir of 20 percent. There are many reasons for the plunge. (04.06.2008)

Kurt Beck said he won't resign as head of the Social Democratic Party (SPD) despite ongoing political chaos in Hesse. Beck attempted to refocus his party, which has been in disarray in recent weeks. (10.03.2008)