A Stuttgart court fined a German company that specializes in anti-fascist paraphernalia adorned with swastikas for using the constitutionally banned symbol. 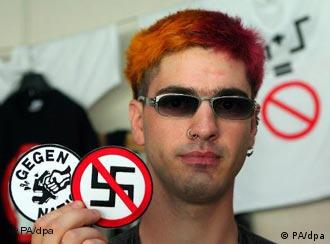 Jürgen Kamm was fined 3,600 euros for his gear

How far can individuals go in using a symbol banned by the German constitution?

It was just this question that the Stuttgart district attorney's office wanted clarified when it brought a case against Nix Gut, a mail-order company that offers left-wing garb adorned with modified swastikas.

The swastika is banned as a symbol of an unconstitutional organization, but German law allows its use if it is clearly in a form indicating opposition to National Socialism.

A crossed-out swastika reminiscent of a no-parking sign or a stick person throwing a swastika into a garbage can are images often used by the left-wing movement in Germany.

But a judge ruled on Friday that the use of the Nazi symbol by the company violated the law and fined the owner, Jürgen Kamm, 3,600 euros ($4,500).

Leftists will have to pick a more neutral symbol

"It is not always so easy to recognize that these symbols are being used against Nazis, especially for foreigners," said Bernhard Häussler, the district attorney said.

Up to now, the justice system in the state of Baden-Württemberg, where the case was tried, handled this problem differently, on a case by case basis. But Stuttgart wanted legal clarity, fearing that if leftists could get away with using the symbol, then neo-Nazis might also find a way around the ban. Thus, the district attorney brought the suit against Kamm.

"There's a danger that the use of swastikas, even in a modified manner, will not be removed from our society," said the prosecutor. "So neo-Nazis could use them for their own means and this should under no circumstances be the case. We want to avoid a situation where the use of these symbols once again becomes normal."

But Kamm has defended the use of the symbol saying that it is clear they are being used in a manner that is opposed to right-wing extremism. He added that he will appeal the case to the Federal Court of Justice. 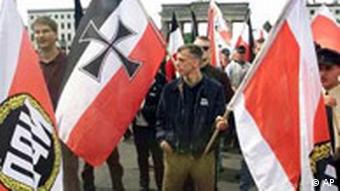 Officials fear that neo-Nazis could skirt the ban


Green party leader Claudia Roth called the case "counterproductive." She had previously reported herself to the police for wearing a button featuring a crossed-out swastika after the case was initially made against Kamm.

It isn't the first time that left-wing supporters have been criminalized for their actions aimed at protesting against neo-Nazis.

Last year, a student in Tübingen was fined for wearing an anti-Nazi button on his backpack. The local court had argued that a Japanese tourist would only see the swastika and wouldn't recognize the crossed-out symbol as an anti-fascist pictogram. The student subsequently won his appeal before a regional court, which ruled that he was clearly expressing his anti-fascist attitude by wearing the button.

In another case, Nigerian soccer player Adebowale Ogungbure, who plays for Sachsen Leipzig made a mock Hitler salute to fans in Halle after being subjected to racist taunts. The player was charged for the action, but prosecutors eventually dropped the charges, because he had been provoked and hadn't understood the gesture was illegal.

Earlier this year, however, authorities in Berlin allowed filmmaker Dani Levy to display swastikas during the filming of a comedy about Hitler.

A German court wants to fine a businessman who is on trial for selling anti-Nazi paraphernalia including crossed-out swastika symbols. (27.09.2006)

The use of swastikas is banned under German law. But they are a common element in symbols used by the left-wing movement. The Stuttgart district attorney now wants legal clarity on this contradiction. (04.04.2006)

Germany's neo-Nazis are increasingly using music to spread their message, particularly among the unemployed youth of the former communist East Germany, according to experts on extremism. (24.12.2005)