Soccer's governing body, FIFA, has decided to fund further testing of goal-line tracking systems. For the game's lawmakers, the use of technology no longer appears to be a question of 'if' but 'when.' 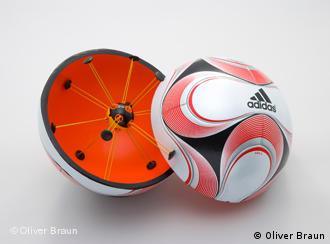 Unlike tennis, cricket, ice hockey and a number of other sports that employ video replay and other high-tech gadgets to help officials make the right calls, FIFA has fought hard to keep technology out of soccer. Too long, many now argue.

Soccer's world governing body has been under tremendous pressure to use goal-line technology since last year's World Cup, when a shot by English midfielder Frank Lampard bounced down from the crossbar over the goal line, but was not counted. The goal would have leveled the match at 2-2 against Germany, which went on to win 4-1.

There were other high-profile mistakes during the tournament that not only infuriated fans, players and coaches, but also prompted FIFA president Sepp Blatter to reverse his long-held opposition to high-tech referee aids. 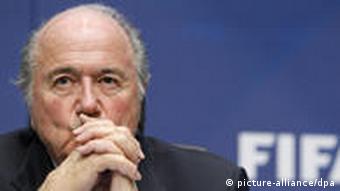 Blatter, who first approved goal-line technology tests ahead of the 2006 World Cup and then abruptly canned them, has now bought some additional time by extending the most recent series of tests for another year. Those tests may be too late for the European Cup in 2012, experts say, but they could be just in time for the 2014 World Cup in Brazil.

Blatter and officials from other powerful soccer bodies such as the International Football Association Board (IFAB) have been fierce opponents of using technology to help referees for various reasons. Among them: it could detract from the fervor of the sport, which thrives on emotions; and it could undermine the "universality" of the game, creating different rules at different levels of competition.

These are legitimate concerns. But soccer today is more than just fan emotion – it's big business. A wrong goal call can cost a club millions if, for instance, it is prematurely booted out of an international tournament or relegated to a lower division after losing a knock-out game.

Blatter and his colleagues now seem ready to act, albeit at their own speed. 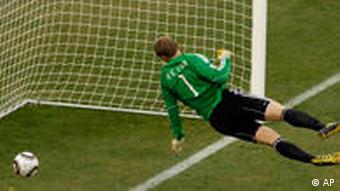 In February FIFA commissioned the ETH Zurich technical university to examine 10 systems for determining whether a goal had been scored. It reported earlier this month that none had fulfilled all FIFA's requirements.

The criteria included 100 percent accuracy and automatic confirmation to the referee within one second, FIFA said in an e-mail response. The tests covered various pre-defined ball speeds and were performed both in daylight and under floodlight conditions. They encompassed a mix of systems, including video cameras, magnetic fields and GPS (Global Positioning Satellite) technology.

FIFA confirmed only two of the 10 developers, sports outfitter Adidas and Bavarian technology company Cairos, which have a collaboration, and added British company Hawk-Eye to the next round of testing.

The Cairos wireless system utilizes chip technology in a ball. Thin cables installed below the turf in a penalty area and behind the goal generate a weak magnetic field. A sensor inside the ball measures the magnetic field as it comes closer, and a transmitter inside the ball sends the encrypted data to the receiver antennas behind the goal to detect when the ball has crossed the line. A central computer transmits goal alerts to the referee.

By comparison, Hawk-Eye, already a mainstay in hard-court tennis tournaments and cricket matches, uses a number of cameras to track the ball visually. It plots the path of the ball and, in the case of cricket, can even predict how a blocked ball would have traveled if there were no interference. In football, cameras installed around the goal are programmed to recognize the ball and detect if it crosses the line. 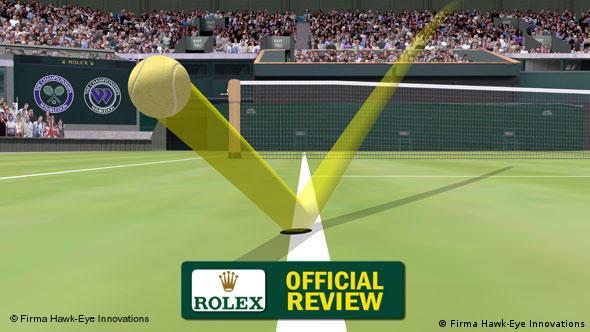 The technology, tested for several years by two English clubs, appears to have potential. Just two days after FIFA's decision to include Hawk-Eye, the company was snatched up by Japanese electronics giant Sony.

Cairos, too, believes it's a frontrunner and the company's CEO, Christian Holzer, questions what its technology is still missing. "I'd like to know what criteria we didn't fulfill," he told Deutsche Welle. "I haven't seen any results yet. But I'm assuming that when FIFA spoke of the best results being 98 percent, we had to be that."

Developing a system that delivers 100 percent accuracy has its challenges, concedes Thomas von der Grün from the Fraunhofer Institute for Integrated Circuits, which has conducted extensive research in ball-tracking technology.

"One of the big challenges with camera-based systems is simply visibility," he told Deutsche Welle. "If the ball is covered for whatever reason, the camera can't see it."

Von der Grün views wireless systems that use soccer balls embedded with either a chip or antenna as the most reliable, though he admits they, too, have to deal with issues such as metal interference. 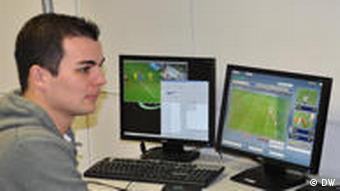 FIFA has fought hard to keep technology out of soccer

FIFA said it will hold a meeting soon to determine the parameters of the next testing phase.

Cairos head Holzer is optimistic and not just because of the company's technology. He points to its licensing model that envisions clubs paying one quarter of their fee to referees for using the technology or roughly 2,500 euros per game in Germany's Bundesliga, for instance.

Adidas is also confident. The company, which has developed an "intelligent football" with an embedded chip, has collaborated with Cairos in creating and testing a goal-line system both in the lab and on the pitch. "The positive experiences with these tests have confirmed that the conditions for a successful introduction required by IFAB are met," Adidas said in a carefully crafted e-mail response.

Clearly, technology isn't the forte of FIFA. But keeping soccer a money-making machine is. And one of the tools that the global soccer machine arguably needs to keep humming is goal-line technology.

A new soccer ball designed to eradicate controversial goal-line decisions is expected to be approved by a law making body in the next step toward its inclusion in the 2006 World Cup in Germany. (25.02.2005)

Controversial calls in soccer about whether a player was offsides or a ball really made it behind the goal line could be a thing of the past thanks to a new technology developed in Germany. (06.01.2005)

FIFA president Sepp Blatter apologized on Tuesday for refereeing mistakes that have blighted the 2010 World Cup. A call during the England-Germany game, in particular, could lead to reconsideration of video technology. (01.07.2010)