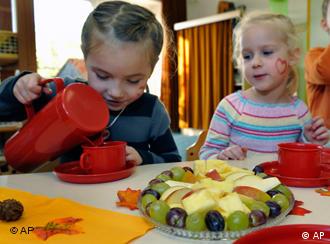 The children's allowances included in the so-called Hartz IV benefit reforms introduced under Chancellor Gerhard Schroeder's government in 2005 look likely to be found unfair by Germany's equivalent of the Supreme Court. Hearings into cases brought by regional and federal courts are to begin on Tuesday. 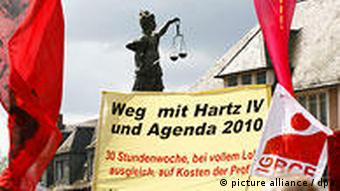 Children aged under 14 receive 60 percent of the adult's allowance, while children between 14 and 17 receive 80 percent. But in reality, children receive significantly less than this because the authorities deduct a standard government payment of 154 euros ($230) which is paid out for all children. 1.7 million children in Germany are dependent on Hartz IV payments.

In one case, a couple with a single child ended up receiving only 53 euros extra. According to critics of the system, in many cases the rules amount to state-sanctioned child poverty.

Monika Paulat, president of the German Social Court Commission, an interdisciplinary legal panel of lawyers, doctors, politicians and representatives of the relevant state bodies, supported the complaints of those appealing to the court.

"Everyone is assuming that the constitutional court will conclude that the standard Hartv IV rates for children are unconstitutional," Paulat said in an interview with news magazine Der Spiegel. "The law was driven through very quickly, and only afterwards did it become clear what hadn't been thought through."

Paulat is calling for the establishment of an independent commission that will calculate the needs of children in the future.

The welfare organization Caritas echoed these calls for an independent appraisal of the Hartz IV rates for children. Caritas general secretary Georg Cremer said authorities should take into account the particular needs of young children, the costs of education, and the cost of activities outside school such as sports clubs and music lessons. "Poor children need to be materially secure," Cremer said. 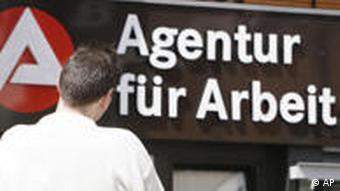 Both the federal Social Court and the Social Court of the state of Hesse have raised doubts about the legitimacy of the standard Hartz IV rates in the past few months, and it is their findings which will be investigated at the constitutional court in Karlsruhe. A decision is not expected until the beginning of 2010.

According to media reports, the constitutional court is taking the reform of Hartz IV extremely seriously, and intends to reassess the legality of all Hartz IV payments, including those for adults.

If, as is expected, the court decides that the system for working out unemployment payments is unfair, the recently elected government, a coalition of Angela Merkel's Christian Democrats and the Free Liberal Party, will be forced to create new standard rates. This is likely to cost a lot more than the 300 million euros the new government has already earmarked for its own alterations to Hartz IV.

Unemployment fell for a second month in a row, surprising economists who expected the rate to rise as Germany recovers from its worst recession in over 60 years. But officials warn joblessness could rise again soon. (30.09.2009)

Rising unemployment as a result of the continuing global economic crisis is having a particular effect on young Germans under the age of 24, a new study says. (22.07.2009)