German bishop: Atheism responsible for Nazis and mass murder | Germany| News and in-depth reporting from Berlin and beyond | DW | 13.04.2009

A German bishop has told his Easter congregation that mass murder and other crimes committed by the Nazis are evidence that atheism is inhumane. His comments have caused outraged among German atheist organizations. 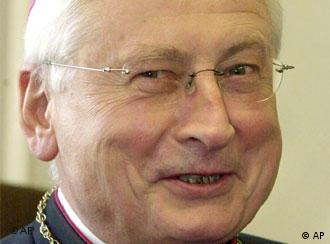 Bishop Mixa has made controversial comments on several occasions

"Without God, everything is permitted."

With this famous quote from Russian writer Fyodor Dostoyevsky, the bishop of the southern Bavarian town of Augsburg wanted to warn his congregation of what he sees as the dangers of atheism.

Bishop Mixa told churchgoers that a society without God was "hell on earth" and could result in bloody regimes such as those led by Adolf Hitler or the Soviet Union.

"Decades past have proven the inhumanity of atheism through the godless regimes of National Socialism and communism, with their penal camps, secret police and mass murder," he said.

"Wherever God is denied or fought against, there, humans and their dignity will also be denied and violated," he added. 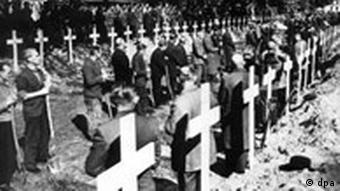 Six million Jews are believed to have died during WWII

Ladwig told German news magazine Spiegel that Mixa's comments were part of a long-running strategy by the church to incorrectly rewrite its own historical dealings with fascism.

"Resistance from the church [to National Socialism] only came from individuals," he said.

Bishop Mixa was also criticized by Michael Schmidt-Salomon from the Giordano Bruno Foundation, a German organization in support of evolutionary humanism.

Schmidt-Salomon told Spiegel the argument that National Socialism was godless was a "grand falsification."

"Evidence shows that the majority of the Nazi elite considered themselves Christian," Schmidt-Salomon said.

A history of controversial comments

Bishop Mixa is known in Germany as being outspoken and has ruffled feathers on more than one occasion.

In just one example in February, Mixa compared the number of Jews murdered by the Nazis to the number of abortions over the past few decades.

He also upset politicians two years ago when he criticized government plans to expand childcare facilities in Germany.

Last June London buses were plastered with the phrase "Jesus Said," which pointed people to a website warning of hell. Now atheists in in Britain's capital are having their own say. One Christian group has complained. (10.01.2009)

Albert Einstein called belief in God a "childish superstition" and rejected the idea that Jews were chosen people. The letter containing the surprising remarks will come up for sale in London this week. (14.05.2008)