A new report out this week says rainy weather, smoking bans and higher prices have put a real dent in beer sales in Germany this year. 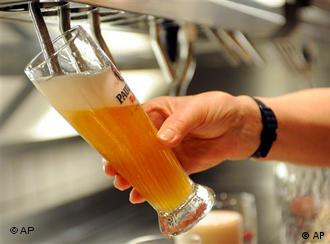 Is it the end of Germany's love affair with beer?

New data released this week by the Federal Statistics Office showed that sales of beer from January to June dropped to their lowest level since the office began keeping track of the numbers back in 1991.

German breweries sold 49,3 million hectoliters (1.1 billion gallons) of beer in the first half of the year. That's down 4.5 percent on the same period last year.

"In addition to the weather conditions, the current increases in beer prices and the ban on smoking in restaurants and so on had an essential impact on the trend in beer sales," the Statistics Office said.

Breweries across the country say they don't dare raise prices in an attempt to make up for the lost revenue for fear of ruining sales.

Michael Weiss, vice president of the Federation of German Brewers, told German news agency dpa that it was the worst decline in the industry's modern history. The Czech Republic overtook Germany in per-capita beer consumption years ago.

The Veltins brewery said German beer consumption declined more than five percent in annual terms in the first half of the year, with higher-priced brands like its own worst affected.

Among the premium German brands, Veltins, Warsteiner, Bitburger and Jever reported slumps ranging from 4.6 to 7 per cent. Veltins did not expect any revival till 2012.

Beer sales have been sliding for years. Beer has gradually fallen out of fashion in Germany as people switch to healthy drinks or to other alcoholic beverages such as wine.

A new study shows that almost all of Germany's 16 largest breweries sold less beer in the first quarter of this year, reflecting a steady decline in beer consumption in the country. (17.07.2009)

A German court in Berlin has sentenced a bar owner to three years and five months in jail for giving a 16-year-old teenager so much alcohol that he later fell into a coma and died. (03.07.2009)

Beyond beer and bratwurst: Germany markets itself in China

Beer and cars are the first things that come to mind when people in China think of Germany. But a new national image campaign is out to change that. (22.06.2009)