As Google engineers and Italian scientists take on autonomous cars, so too does a group in Berlin. They hope to kickstart the industry with new kinds of cars within a decade or sooner. 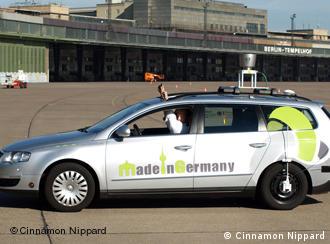 The MIG station wagon is a converted VW Passat

Yesterday, scientists from Berlin's Free University demonstrated their autonomous car dubbed "Made In Germany" or MIG.

The converted Volkswagen Passat station wagon is equipped with discreet sensors, cameras and a computer system, which is able to process the input, and steer, accelerate and brake appropriately.

Raul Rojas, professor of artifical intelligence at the Free University and head of the Berlin research team, said that intelligent cars will reduce the number of accidents and be more environmentally friendly due to increased efficiency and car sharing.

During the demonstration at Berlin's former Tempelhof airport the car was given instructrions via an iPad using GPS coordinates and displayed on Google Maps.

This demonstration comes at a time when there is an increased focus on autonomous cars. Earlier this month, Google announced its own such project underway in California, while another Italian team is currently conducting an extensive road test from Italy to China.

All of these projects are the result of a series of US government-sponsored autonomous car challenges over the last six years.

The Berlin research team created an obstacle course simulating real-world conditions which included car-lanes, traffic lights, cyclists, a couple with a stroller, and a ball being suddenly thrown into the path of the MIG car. In another instance MIG navigated around a car that had stopped in front of it and then avoided a traffic road-block.

Autonomous cars are about mobility 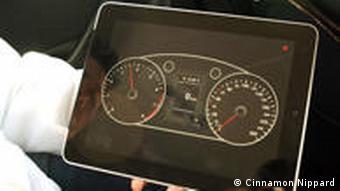 The iPad software can show a whole range of parameters, including the car's speed.

Rojas said that he sees autonomous cars being used in a car-sharing situation, thereby increasing the efficiency of this mode of transport.

Alberto Broggi, a professor of computer engineering at the University of Parma in Italy, has also been working on the development of autonomous cars for many years. He currently heads the VisLab Intercontinental Autonomous Challenge to drive a car from Parma, Italy, to Shanghai, China.

For Broggi as well, autonomous cars are about accessibility.

"Young people or elderly people, or people who with no driving license," he said. "If you have a vehicle that can drive by itself, they can benefit from an extended level of mobility."

Both Broggi and Rojas agree that autonomous cars could be introduced on highways much sooner than in urban areas.

"Highway driving is a kind of friendly environment, a structured environment, everybody's moving in the same direction. There's no traffic lights," he said.

Broggi added that autonomous vehicles could be very useful in particular industries like mining and agriculture where there are "pre-structured environments", for example "a tractor could move on the field without anybody on board." 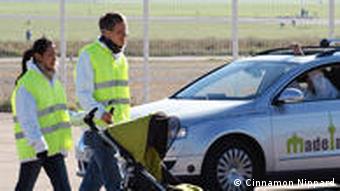 One of the real-world scenarios was a couple with a stroller crossing the street.

When asked about the possibility of software malfunctions or computer crashes, Rojas said the answer is having redundant or back-up systems.

That means having not just one computer on board, but two or even three.

"One computer is driving and the other two are just watching the first computer over the shoulder," he said. "And if they detect any malfunction or if they see that the computer is not giving the appropriate instructions, they can take over or they can stop the car."

But if something were to really go wrong, Broggi said there are legal aspects still to resolve as well, like who is to blame if your vehicle has an accident.

But Rojas said that compared to a human who can adapt to the changes in the environment, the real challenge is creating an intelligent system that is also capable of learning.

Rojas added that car manufacturers are afraid they will lose customers with this kind of technology, but thinks they will adapt by transforming "into mobility producers or mobility service companies."

Rojas believes that autonomous cars are the way of the future in terms of safety, the environment and of course mobility.

"Right now we have so many cars in the streets because nobody wants to lose mobility. The moment you offer the same mobility, then I think people will accept this technology," he said. 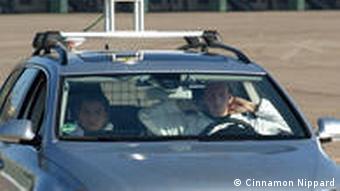 Dr Daniel Göhring sits in the driver's seat with his hands behind his head to show that he really isn't driving.

Compared to 20 years ago or even 10 years ago, new cars today have a range of "smart" safety functions, from lane departure warning, and adaptive cruise-control, to assisted braking. Volvo recently announced its pedestrian detection system.

For Rojas, he thinks of all these kinds of driver-assistant systems in a more personal way.

"I always say its like having my wife in the car telling me what I am doing wrong when I am driving," he said.

With Google's announcement last week about its autonomous car, the spotlight has landed on this field of research. Rojas said it's a positive step.

"Of course that's a big advantage if you have a big company like Google behind your results, that's a game-changer - it's not just any company," he said.

An Italian project enters its third and final month of autonomous driving from Parma to Shanghai. One human-driven van leads while an autonomous van follows behind using sensors, GPS and other devices. (07.10.2010)

One month on, Italian autonomous vehicle continues its trek to China

Italian scientists have pioneered a robotic van that can navigate streets on its own. The trip has been largely smooth so far, save a little incident in Moscow, the project's leader says. (27.08.2010)

Italian autonomous car to drive from Italy to China

University of Parma scientists have pioneered robotic cars that can navigate on their own. They are about to drive from Italy to China and plan to arrive by mid-October. (23.07.2010)

The automotive industry is doing well despite COVID-19, while the trade show industry is reeling from the pandemic. At the IAA Mobility in Munich, the two will come together for a fresh start.