The coveted peace prize of the German Booksellers' Association will go to German artist Anselm Kiefer this year, the organization announced on Wednesday, June 4. 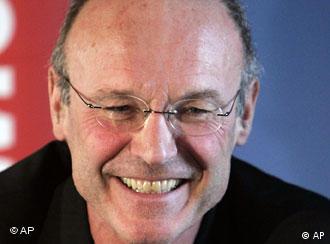 Kiefer has lived in Paris for 15 years

In Frankfurt, the judges defended the unusual choice of an artist for a literary award.

Association officials said that they had chosen the 63-year-old Kiefer as "a world-renowned artist, who confronts his times with the disturbing moral message of the ruinous and transitory."

The judges said Kiefer, whose sculptures include huge replica airplanes made of battered, corroded lead, had evolved imagery "that makes the viewer feel like a reader." He had also used the recognizable shape of books as a key element in his paintings.

"Not only his installations, which constantly reference great texts, show the extent to which Kiefer deals with literature and poetry -- he has turned the book itself and its form into a decisive means of expression," they said.

Kiefer's paintings and sculptures, displayed in leading contemporary art museums such as Denmark's Louisiana, often have an anti-war message.

The prize judges said Kiefer, a student of German artist Joseph Beuys, had confronted society with the "disturbing message that all things die" and had posed the question whether Germans can ever be artists again after the Holocaust and Nazi domination of the arts.

The Frankfurt peace prize, which comes with 25,000 euros ($38,600), was first awarded in 1950 and usually goes to novelists, and sometimes to scholars, whose writings are deemed to improve understanding between rival nations and ethnic groups. Recent winners include historian Saul Friedlaender, sociologist Wolf Lepenies and Turkish writer Orhan Pamuk.

Kiefer, who lives in Paris, will receive the prize at a ceremony on Oct. 19, which takes place during the Frankfurt Book Fair.