Weapons manufacturer Heckler & Koch said it would end its relationship with Blackwater after German media reported that the controversial US-run military firm was using its guns in Iraq and Afghanistan. Blackwater, a private security company which has been contracted to protect high-profile US officials and foreign dignitaries in Iraq, had been using Heckler & Koch machine guns in both Iraq and Afghanistan, German broadcaster ARD's "Report Mainz" program reported Monday, Feb. 19.

The German arms manufacturer contacted the program shortly before the report was aired on Monday night and said it would cut all its ties to the US firm, according to "Report Mainz."

The German company on its Web site described its work with Blackwater as a "unique and strategic partnership" in which the two firms were cooperating to develop "special edition" firearms and offer training courses in the United States to use Heckler & Koch weapons. 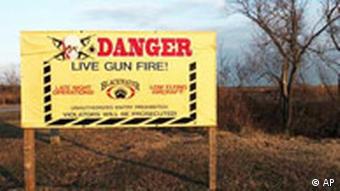 There was no mention of Iraq or Afghanistan, and the company reportedly denied it had developed a weapon for Blackwater, as reported by the TV program.

The German government had not given Heckler & Koch permission to provide Blackwater with firearms, "Report Mainz" said, referring to information it received from Germany's Economics Ministry.

Heckler & Koch would not provide the program with information as to how Blackwater got its weapons. However, it may have taken advantage of a loophole by merely transferring the firearms to its US subsidiary, which then handed over the wares, the report suggested.

Blackwater has been under intense scrutiny from the US Congress as a result of the high number of civilian deaths and injuries the company has caused in Iraq. The most controversial incident was in September, when Blackwater guards were said to have fatally shot 17 Iraqi civilians in Baghdad.

The company is neither subject to Iraqi law, nor governed by US military tribunals, which allows it to operate without fear of repercussions.

"It is scandalous and unacceptable that a German arms company cooperates with such a lawless mercenary troop … although it must know that this firm is involved in illegal killings in Iraq," Green party parliamentarian Hans Christian Ströbele told the program's reporters.

The Social Democrats' foreign policy spokesman, Gert Weisskirchen, called for legislation to prevent German firms from participating in the "privatization of war" and said that "such cooperation should be scrutinized."

Free Democratic Party parliamentarian Werner Hoyer echoed those comments, saying that there was a gap in legislation that needed to be closed.

While experts say Germany will likely increase its military involvement in Afghanistan, the subject remains politically taboo. The gap between German rhetoric and reality is likely to increase as elections near. (18.02.2008)

The European Commission has proposed a bundle of new measures to promote innovation and competitiveness and stop national protectionism in Europe's defense industry. (06.12.2007)

October 24-30 is UN Disarmament Week, but that's of little interest to the flourishing German arms industry. Berlin has the last word on arms sales, and gives the go-ahead a bit too willingly, say human rights groups. (28.10.2007)

Should countries restrict companies' dealings with private military firms? Send us an e-mail. Please include your name and country in your reply.