There was relief for travelers as German air traffic controllers cancelled a strike planned for Tuesday after a last-minute agreement was brokered. 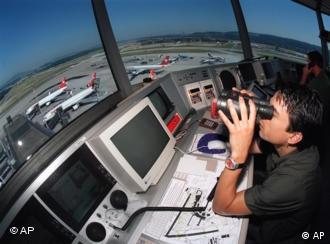 Air traffic controllers are unhappy with their pay offer

German air traffic controllers have called off a strike planned for Tuesday, after employers agreed to settle a dispute with unions through a process of arbitration.

The German agency responsible for air traffic, DFS, initiated an arbitration process with the union over employees' demands for wage hikes.

The surprise move by DFS followed a court judgment Monday that ruled the strike, which had been due to begin at 6 a.m. local time the following day, did not break the law.

The Trade Union of Air Traffic Controllers (GDF) was forced to cancel a strike last Wednesday after the action was banned by a labor court in Frankfurt.

Major delays had been anticipated on Tuesday, if the strike had gone ahead.

German airline and tourism industries had been sharply critical of the timing of the strike. German Transport Minister Peter Ramsauer said he did not understand the need for a strike to take place during the holiday period.

In past weeks the GDF has rejected renewed direct talks, having been unable to secure a better offer from DFS. Management has offered the union a settlement of 4.1 percent, which they declined.

The GDF, which represents more than 3,000 of Germany's 5,500 air traffic controllers, is demanding a 6.5 percent wage increase and wants pay to be linked to length of service.

Air traffic control dispute moves into next round

A German air traffic controllers strike was called off this week after a court ruled that it was "contrary to the social peace." But the union says their fight is far from over and have threatened more action. (05.08.2011)

A planned strike by German air traffic controllers has been ruled unlawful by a court in Frankfurt. The strike, due to have taken place on Thursday, would have affected passengers on over 2,500 flights. (04.08.2011)

Passengers faced disruption at major airports in France on Wednesday, as air traffic controllers went on strike in protest at the EU's planned harmonization of European airspace. (21.07.2010)