After a German aid organization put the death toll in Burma from Cyclone Nargis at 50,000, one US diplomat said Thursday, May 8, that the figure could actually top 100,000 once missing people are accounted for. 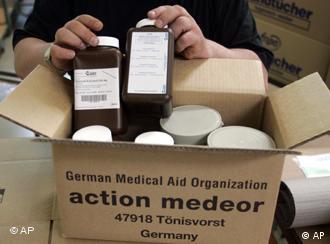 Aid is starting to arrive

ADRA was previously involved in reconstruction in the region after the Great Indian Ocean Tsunami of 2004.

The organization said in Bonn Wednesday that that the badly hit Piensalu district had earlier been home to 150,000 people, and estimated that the death toll from Cyclone Nargis exceeded 50,000 based on its local knowledge and a visit by a reconnaissance team to the Irrawaddy Delta disaster zone.

For the time being, Burma's military government has put the death toll at 22,500, with more than 41,000 people still listed as missing.

But a military official in the delta township of Labutta estimated 80,000 dead there alone, and many families told an AFP reporter who traveled to the area that most of their relatives had been killed and there was virtually no food or fresh water left.

According to Tin Win, a district leader, dozens of the 63 villages surrounding Labutta have been wiped out.

"So far the estimated death toll in those villages is about 80,000," he told AFP.

Shari Villarosa, US charge d'affaires in Yangon, believed there could be more than 100,000 dead in the Irrawaddy delta region where 95 percent of buildings are reported to have disappeared.

In a conference call with reporters in Washington, she warned of a shortage of staple foods such as rice and a "real risk" of disease because of the lack of clean drinking water.

UN Secretary General Ban Ki-moon called it a "critical moment" for one of the world's poorest countries.

Witnesses said that Saturday's storm, packing winds of 190 kilometers per hour, had left the delta region submerged under six-meter-high waters.

As the waters receded, countless corpses have been left rotting in the heat alongside the bloated carcasses of animals.

Not just about politics

The UN's Office for the Coordination of Humanitarian Affairs said the World Food Program had already been able to distribute some food aid in Yangon, and aid has also arrived from Thailand and China.

But the UN refugee agency said 22 tones of supplies were stuck at the border with Thailand awaiting permission to enter.

Other frustrated aid agencies have said they are also being denied permission to enter the country and use their experience and expertise to ensure the right aid gets to the neediest places as soon as possible.

Myanmar opposition leader Aung San Suu Kyi's National League for Democracy said survivors were in "urgent need" of foreign assistance but the White House said the secretive generals still had not responded to its offers of help.

"It should be a simple matter. It's not a matter of politics. It's a matter of a humanitarian crisis," US Secretary of State Condoleezza Rice said.

UN humanitarian chief John Holmes said the extent of the tragedy was starting to emerge, and urged the junta to facilitate the arrival of relief teams and the distribution of badly-needed emergency supplies.

"We need to encourage the authorities to move further and not to bludgeon them over the head," he told the BBC.

He said 24 countries had offered specific help and another six unspecified aid, adding up to well over $30 million with more to come.

Despite Disaster, a Glimmer of Hope for Burma's Future

As western groups urge Burma's military regime to remove red tape delaying a large international aid operation, DW-WORLD.DE spoke with an expert about whether the tragedy could result in positive change in Burma. (07.05.2008)

The full extent of the disaster caused by Cyclone Nargis in Burma remains unclear. But one thing is apparent: the regime is unwilling to delay its planned referendum on the constitution, says DW's Tobias Grote-Beverborg. (06.05.2008)

The following international organizations are involved in delivering aid and supplies to Myanmar in the aftermath of a devastating cyclone that killed more than 20,000 people. (06.05.2008)