In Afghanistan, a women's rights activist who had returned from years in exile in Germany has been gunned down by Taliban militants. 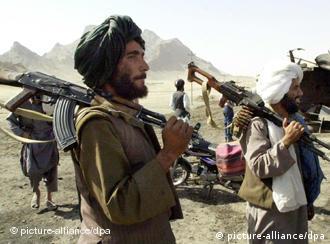 The Taliban in Kandahar have claimed responsibility for killing Achikzai

Taliban militiamen on motorcycles shot Sitara Achikzai dead outside her home in Kandahar as she returned from work on Monday. A local Taliban commander has claimed responsibility for killing the high-school teacher and provincial legislator.

Achikzai and her husband, a doctor and university lecturer, had returned from exile to work in the southern Afghan city of Kandahar, leaving their son and daughter in Germany.

The Taliban have carried out similar assassinations in Kandahar in recent years. Last year they admitted to murdering the country's highest profile female police officer, and they are believed to have been behind the 2006 assassination of the head of the provincial women's affairs department.

Two years ago, Zarghona Kakar, another woman on the Kandahar provincial council, survived a Taliban assassination attempt in which her husband was killed.

Taliban members also sprayed acid into the faces of schoolgirls in Kandahar in November last year.

The Taliban militia was established in Kandahar province in the early 1990s and ruled Afghanistan from 1996 to 2001. During their time in government, the Taliban placed heavy restrictions on women, barring them from education and work outside the home.

After meeting German troops in Kunduz and Mazar-e-Sharif, Chancellor Angela Merkel had planned to visit a third base in Feyzabad on Tuesday, but heavy cloud in the mountainous region made the helicopter flight too risky. (07.04.2009)

A new law in Afghanistan requires women to be more submissive to their husbands and to have sex with them on command. Europe has criticized the law, saying it's worse than when the Taliban ruled the country. (04.04.2009)

Germany says it is ready to meet US President Obama's request for more resources in Afghanistan, by stepping up its training of local police and security forces. But the issue of more troops remains off the table. (30.03.2009)