The suspect was allegedly involved in fighting, manning a checkpoint and appearing in a gruesome video with a headless corpse. He was arrested earlier this year when he returned to Germany to be with his pregnant wife. 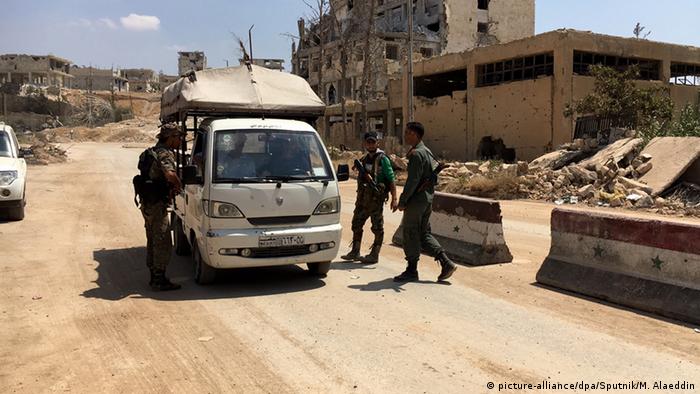 A 22-year-old German citizen is facing terrorism-related charges after prosecutors accused him of joining the self-styled Islamic State (IS) militant group in Syria.

Identified only as Tarik S. because of German privacy rules, the man appeared in Düsseldorf Higher Regional Court, where he stands accused of joining the jihadist group in 2013 after crossing into Syria from Turkey.

He faces numerous charges, including joining a foreign terrorist organization, disturbing the peace of the dead and deprivation of liberty.

The criminal charges stem from allegations he appeared in IS propaganda videos, mocked a decapitated corpse in a video and manned a checkpoint where he detained a truck driver for a day because he was transporting a large volume of cigarettes.

The suspect had also allegedly carried arms and engaged in battles.

Prosecutors said he returned to Germany in March to be with his pregnant wife and was arrested on arrival at Frankfurt airport. He is one of several German nationals facing prosecution for allegedly joining the outlawed group.

Police have found material glorifying the "Islamic State" at the home of a 27-year-old man arrested on terror suspicions in eastern Germany. They found no explosives, but did turn up some pyrotechnic devices. (17.08.2016)

Human Rights Watch (HRW) has accused the Syrian and Russian air forces of dropping incendiary weapons on civilians in rebel-controlled areas. Russian aircraft have begun bombing runs from an air base in Iran. (16.08.2016)