Georgia′s Borders Must Be Recognized, Says Former Minister | Europe | News and current affairs from around the continent | DW | 09.08.2008

The conflict over South Ossetia must be resolved politically, says the former education minister from Georgia, Alexander Kartosia. The territorial integrity of Georgia, however, is not up for questioning. 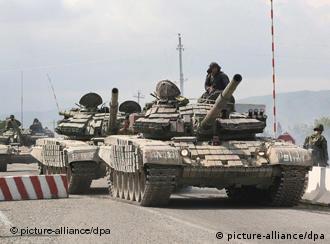 Alexander Kartosia was education minister in Georgia from 1998 to 2004. He now teaches at the European University Viadrina in Frankfurt (Oder) in Germany.

DW-WORLD.DE: Georgia is applying military force against the breakaway enclave of South Ossetia. Is the best way to respond to claims for independence by both South Ossetia and Abkhazia?

Alexander Kartosia: No, that's not the way to solve the conflict. You see, the military offensive came suddenly. The situation escalated from day to day. The Georgian government offered to sit down at the negotiating table with the de facto government in South Ossetia several times last week. But the South Ossetian government rejected all the offers. It's unfortunate that the Georgian side allowed itself to be provoked. But the daily attacks from the Ossetian side were just too much to bear for the residents in the targeted Georgian villages. I just hope there are no deaths among the peaceful population in South Ossetia.

How can a war between Russia and Georgia be averted?

The only sensible step would be to end all the fighting and no matter what prevent the military escalation. That applies to both Russia and Georgia. Each side must sit down at the table and begin negotiating.

South Ossetia voted for independence in a 2006 referendum. Why doesn't Georgia recognize this?

Two principles collide here: the principle of self-sovereignty and the fundamental principle of the territorial integrity of a nation. South Ossetia is a part of Georgia, and that needs to be respected. The case of Kosovo is not really an appropriate analogy: the right to self-sovereignty played the decisive role there, but the charges of ethnic cleansing were also recognized on an international level. That's not the case in South Ossetia. So for this reason, the territorial integrity of Georgia takes precedence.

Why does Russia support the breakaway regions of South Ossetia and Abkhazia?

From a formal perspective, Russia has the right to protect South Ossetia, because many of the residents in the region are also citizens of the Russian Federation. But the real reason is something different: Georgia wants to enter NATO and the European Union. Russia will not allow Georgia -- a former member of the Soviet Union -- to join these organizations and can not accept Georgia's pro-western aspirations.

As fighting continues between Russian backed separatists and the Georgian army in South Ossetia, DW-WORLD takes a look at the history of the dispute which has created tension since the break up of the Soviet Union. (08.08.2008)

The United Nations Security Council called an emergency session on Friday as Georgian President Mikheil Saakashvili said that Russia was "fighting a war" with Georgia over its breakaway province South Ossetia. (08.08.2008)