Georgian President Declares State of War, Calls for Ceasefire | Europe| News and current affairs from around the continent | DW | 09.08.2008

Georgian President Mikheil Saakashvili on Saturday called on the Russians to agree on an immediate ceasefire to fighting in South Ossetia after saying earlier that his country was in a state of war. 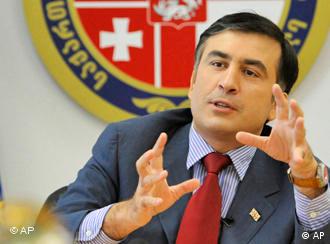 Saakashvili has said that his country is at war

As a first sign of seeking a truce, Saakashvili has ordered Georgian troops out of the South Ossetian capital of Tskhinvali, a Georgian security official said on Saturday.

Alexander Lomaia, the secretary of Georgia's National Security Council, told journalists in the early afternoon that the troops were still being shelled by Russian forces.

"The troops have been positioned in nearby territory of Tskhinvali and they have also been ordered not to respond to Russian shelling to the extent possible," Lomaia said in response to questions from Western journalists.

During an earlier press conference conducted in English, Saakashvili said Russia had launched a full-scale military invasion of his country.

"I call for an immediate ceasefire," Saakashvili said, with Georgian and EU flags standing behind him. "Russia has launched a full scale military invasion of Georgia."

During a televised earlier meeting of the Georgian national security council, Saakashvili had said that he had signed a decree on a state of war. At the press conference, he pointed out that this did not mean any curtailment of press freedom, but instead called parliament to a permanent session and placed the entire country on high alert. 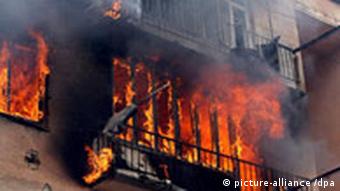 Reports on the damage vary widely on both sides

Russian warplanes meanwhile bombed and virtually destroyed a key Georgian port and hit another city. Russian ambassador to Georgia told the Interfax news agency on Saturday that at least 2,000 civilians have died in the South Ossetian capital of Tskhinvali as a result of fighting between Russian and Georgian forces.

Georgian officials have so far denied Russian casualty figures, saying they were blown out of proportion.

Georgian officials said a Russian aerial bombardment had hit sites near the capital Tbilisi and key oil pipelines and "completely devastated" the Black Sea port of Poti in attacks that the country's UN ambassador likened to "a full-scale military invasion." Poti is a key port and staging post for moving oil and other energy from the Caspian Sea to the West.

Bush calls for end to bombing 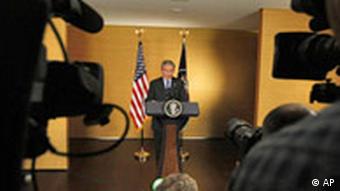 Bush spoke in Beijing on Saturday

US President George W. Bush on Saturday meanwhile said that Russian attacks on Georgia outside the war zone of South Ossetia were a "dangerous escalation" of the crisis and urged Moscow to halt the bombing immediately.

"I'm deeply concerned about the situation in Georgia," said Bush, who is currently in Beijing for the Olympics. "The attacks are occurring in regions of Georgia far from the zone of conflict in South Ossetia. They mark a dangerous of escalation in the crisis."

He said Georgia's territorial integrity must be respected and "we call for an end to the Russian bombings."

Finland's foreign minister, the current head of the OSCE, meanwhile said Saturday that a quick end to fighting in South Ossetia was unlikely.

"We can always hope, but a ceasefire looks at the moment, at least in the short term, very unlikely," Foreign Minister Alexander Stubb of Finland, the current chairman of the 56-nation Organization for Security and Cooperation in Europe (OSCE), told Finnish daily Aamulehti. 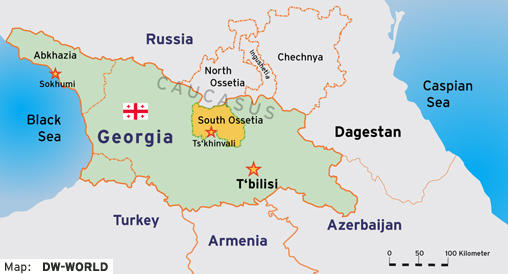 The OSCE monitors security in the region and has a mandate to promote talks between the parties to the conflict. 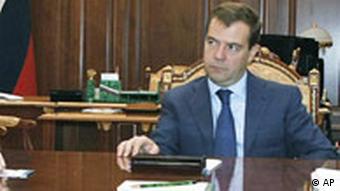 Russian President Dmitry Medvedev said Saturday that his country's peacekeeping forces in Georgia were carrying out a "peace enforcement operation" to protect civilians in South Ossetia.

"Our peacekeepers and reinforcement units are currently running an operation to force the Georgian side to (agree to) peace," Russian news agencies quoted Medvedev as saying at a meeting with Defense Minister Anatoly Serdyukov. "They are also responsible for protecting the population. That's what we are doing now."

Georgian television showed images of hundreds of rockets and heavy artillery shells crashing into the South Ossetian capital Tskhinvali. Shelling reduced entire city blocks to rubble, according to eyewitnesses. Counts of civilian casualties varied widely, with Georgia estimating between one and two dozen killed, and some 100 injured as of Friday evening.

Eyewitnesses said many victims lost their lives when caught out in the open by artillery fire as they attempted to flee. Georgian television showed images of corpses sprawled along sidewalks and streets, in some cases still holding luggage.

Who is in control? 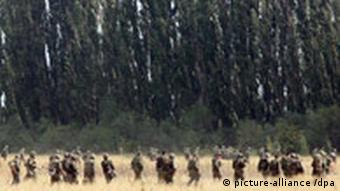 Soldiers from both sides are moving in on South Ossetia

Control of Tskhinvali appeared disputed on Saturday, with Georgian officials asserting total control of the city, and Russian officials claiming that they had taken the city.

Refugees were leaving the region and heading north towards the Russian border throughout the night, at times under Georgian artillery fire.

Georgian forces late on Friday ceased fire for some three hours to allow civilians to leave, but according to Russian observers Georgian shelling interdicted roads leading north throughout the night. 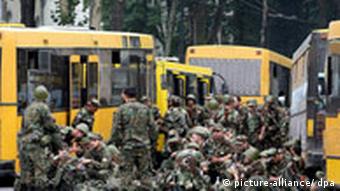 Georgian has also mobilized its reserves

Georgia will reportedly withdraw its entire Iraqi contingent of 2,000 soldiers and bring them home as soon as possible as the country is engaged in fierce fighting with Russia over breakaway province South Ossetia.

The commander of the Georgian contingent in Iraq said that the full brigade would go home as soon as possible.

"We are waiting for the US side. They are providing us with transportation," Colonel Bondo Maisuradze told Reuters news service.

Analysis: Georgian Army May Be Tough Nut for Russia to Crack

The war in the Caucasian province Ossetia may seem like an uneven contest between giant Russia and tiny Georgia -- but on the battlefront things are a bit different. (09.08.2008)

Georgia's actions in South Ossetia have in fact turned into a Ruso-Georgian war. The information war, however, has also reached a new level of escalation, says DW's Ingo Mannteufel. (09.08.2008)

The conflict over South Ossetia must be resolved politically, says the former education minister from Georgia, Alexander Kartosia. The territorial integrity of Georgia, however, is not up for questioning. (09.08.2008)