George Bizos, the lawyer who aided Nelson Mandela during apartheid, has died in Johannesburg at 92. Once a Greek refugee, Bizos went on to help draft South Africa's constitution and abolish the death penalty in 1995. 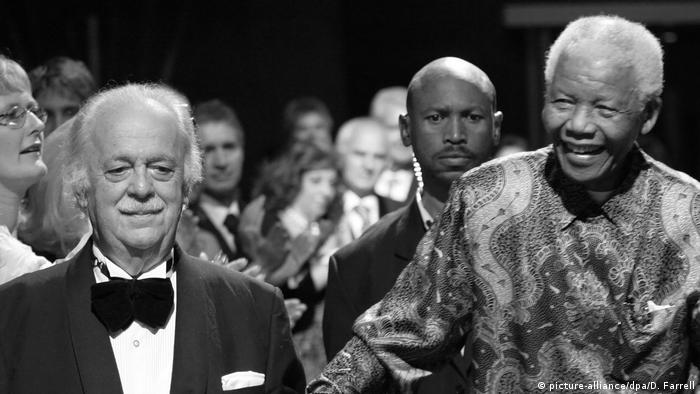 The family of George Bizos said the lawyer and anti-racism campaigner died peacefully Wednesday at his Johannesburg home at the age of 92.

President Cyril Ramaphosa described Bizos as "one of the architects" of South Africa's post-apartheid constitution and "immensely" important in pressing for democracy.

"This is a very sad moment for our country," said Ramaphosa in a televised eulogy for Bizos. Earlier this year, fellow anti-apartheid veterans Andrew Mlangeni and Denis Goldberg also passed away.

From refugee to lawyer

The soft-spoken Bizos reached South Africa in 1941 as a 13-year-old World War II refugee fleeing Greece, then under Nazi occupation.

He studied law in Witwatersrand, leading him to defend Nelson Mandela in 1964 during the Rivonia treason trial.

Bizos is credited with getting Mandela to add the phrase "if needs be" to his speech from the dock, intimating he was prepared to die for his ideals.

Mandela and seven others were sentenced to life in prison, with the future president incarcerated on Robben Island until his release in 1990.

The two met as law students, and while Mandela spent many years in white-regime jails, Bizos helped to look after the anti-apartheid icon's family and others.

Bizos played a key role in negotiating with the then-white regime for Mandela's release.

In his memoirs, Bizos wrote that lofty principles espoused in a constitution were "no guarantee" that they would be enforced or implemented.

"Much work and courage is needed to ensure they are maintained despite an ever-changing history," he wrote.

'Rainbow nation' is still a dream in South Africa