General John Allen has ended his 19-month tour as leader of NATO's International Security Assistance Force in Afghanistan. With troops withdrawing, US General Joseph Dunford is to be the last ISAF chief there. 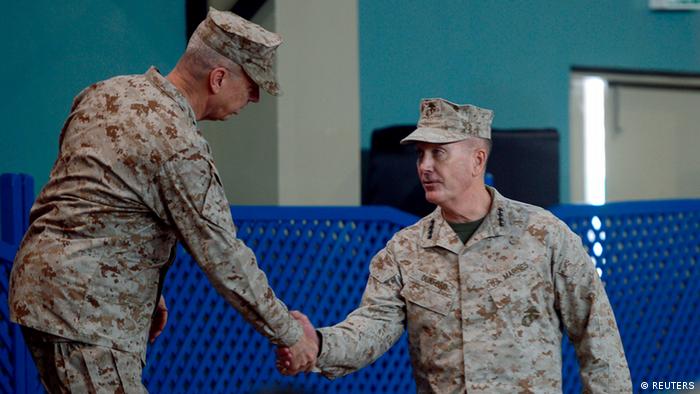 General Joseph Dunford assumed command of the mission in Afghanistan on Sunday, inheriting a post held by 16 previous NATO Allies since December 2001. Speaking before international and Afghan officials at a ceremony in Kabul, the new ISAF commander expressed his wish to follow in the path of his predecessor.

"Today is not about change, it's about continuity. What has not changed is the will of this coalition," Dunford said.

"I'll endeavour to continue the momentum of the campaign and support the people of Afghanistan as they seize the opportunity for a brighter future," he said.

The mission is tasked with supporting the Afghan government's efforts to ensure stability. Dunford is assuming the top post during a difficult time, characterized by increased insider attacks against NATO troops. He is also inheriting the larger task of overseeing troop withdrawal by the end of 2014, bringing an end to a United Nations-mandated mission that will have spanned 13 years.

The general, best known for his role as commander of the Marine 5th Regiment during the US invasion of Iraq, earned praise from Defense Secretary Leon Panetta who has referred to him as "an exceptionally gifted strategic leader."

In 1977, the Boston native received his commission. Dunford graduated from the US Army Ranger School, the Marine Corps Amphibious Warfare School, and the US Army War College. Dunford also attended Georgetown University and Tufts University, where he earned an MA in Government and an MA in International Relations, respectively. The general previously served as the Assistant Commandant of the Marine Corps from October 2010 to December 2012.

His predecessor, US General John Allen, is to receive a nomination from the White House as NATO's supreme allied commander in Europe. The decision was announced after the Pentagon exonerated him from allegations of professional misconduct linked to a scandal that led to the resignation of CIA Director David Petraeus.

In the days leading up to the leadership handover, General John Allen praised ISAF accomplishments in Afghanistan and expressed his confidence in the necessity of continued efforts in supporting the country's government.

Despite the loss of troops, Allen called the campaign "worth it" during an interview with the NATO channel, adding that today's Afghanistan differs greatly from the Taliban-led country over a decade ago.

"[The troops] have made a difference, they have been successful," he said. "They have given Afghanistan a possibility for a bright future."

He also spoke of the importance of the continued promotion of women's education for both the country's success and for the prevention of another Taliban takeover.

In a separate interview with Reuters news agency, the US general said his successor would continue ISAF's mission.

"We're going to work very, very hard to ensure that our interest and commitment does not diminish in any way by crossing that temporal seam of 31st December, 2014," he said, referring to the day the coalition officially ends its mission.