Dutch support has shifted away from Geert Wilders' far-right in favor of pro-EU groups, exit polls show. EU polls, which began earlier in the day in the Netherlands and the UK, continue across the bloc through Sunday. 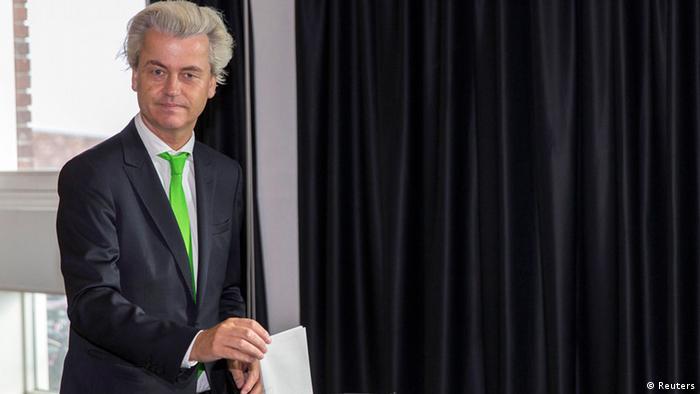 Dutch media reported a surprise loss for Geert Wilders' and his far-right Party for Freedom, citing exit polls released on Thursday evening. The drop in support would mean a victory for the Netherlands' center-left and center-right parties, as well as for the prime minister's Liberal Party.

"Everyone had the chance today to vote for the European Parliament and the Netherlands overwhelmingly chose for Europe," Democrats 66 leader Alexander Pechtold said on Thursday night.

According to the preliminary count released after polls closed, Wilders' party won 12.2 percent of the vote, down from 17 percent in 2009. The loss in support would translate to a drop from five seats down to two in the EU parliament. The Netherlands holds 26 seats in the EU's 751-seat parliament.

The anti-immigration, anti-Islam politician had been expected to win up to 23 percent, according to opinion polls published ahead of the race.

The centrist Democrats 66 party garnered 15.6 percent of the vote, barely coming out ahead of the center-right Christian Democrats' 15.2 percent.

Despite a loss of public support over weak economic recovery, Dutch Prime Minister Mark Rutte's Liberal party made slight gains, pushing it just ahead of Wilders with 12.3 percent.

Official results are not expected until late Sunday.

Although initial media reports speculated recent racist remarks by Geert Wilders had cost his party more seats in the EU parliament, low voter turnout could also have contributed to the loss.

An estimated 37 percent of registered voters turned out on Thursday, according to a poll of 40,000 voters conducted by Ipsos for Dutch TV. That would mark unchanged turnout from the 2009 polls.

According to VU University Amsterdam political science professor Andre Krouwel, the far-right Party for Freedom maintained a strong base, despite the disappointing outcome.

"[Wilders'] support isn't down, around one-third of the electorate agrees with him - but that one third didn't show up," Krouwel told Reuters news agency. "That's bad news for him, because he wanted to portray himself as a victor…That would have given him status in Europe."

Supporters of the 28-member bloc have been concerned over the rise of euroskepticism across member nations, particularly where economic recovery has been slow and unemployment numbers have stagnated amid austerity measures.

Polls closed in the United Kingdom at 10 p.m. local time (2100 UTC). Early exit polls have not yet been released.

Prime Minister David Cameron's Conservatives were expected to lead in the race. However, the UK Independence Party (UKIP), a right-wing euroskeptic party, was perceived as a threat, as it came out ahead in opinion polls over the main opposition Labour Party.

On the day of the vote, all three leading parties attempted to mobilize their bases via social media. However, voter turnout was not expected to top the 35 percent seen in 2009.

A total of 400 million Europeans in 28 countries are eligible to elect European parliamentarians, with the voting running until Sunday. Most countries, including Germany, go to the polls on Sunday, May 25. Ireland and the Czech Republic vote on Friday; Latvia, Malta and Slovakia open polling stations on Saturday.