The East German secret police spied on the man who would become Pope Benedict XVI for 15 years, targeting him as one of the Vatican's fiercest opponents of communism, according to a report published Sunday. 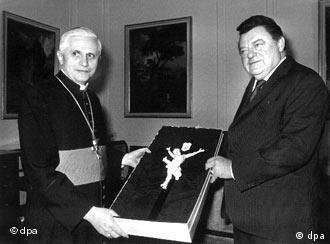 The Stasi started watching Ratzinger long before he became pope

From April 1974 until the fall of the Berlin Wall in November 1989, the feared Ministry for State Security kept close tabs on the then theology professor Joseph Ratzinger, according to documents from the so-called Stasi archives printed Sunday in the weekly Bild am Sonntag.

"Ratzinger is seen at the Vatican as one of the staunchest opponents of communism," a Stasi spy noted in his file after the late John Paul II named Ratzinger prefect of the Congregation for the Doctrine of the Faith in 1981. The report said the Stasi also attempted in vain to unearth damaging documents from Ratzinger's involvement in the Hitler Youth under the Third Reich.

Pope said to have approved publication

An "unofficial collaborator" for the regime using the alias "Birke" (birch) reported on lectures Ratzinger gave at a seminary in the eastern city of Erfurt and recognized his importance to the Roman Catholic Church. "Ratzinger is currently, after the pope and Secretary of State (Agostino) Casaroli, the most influential political and leading ideologue at the Vatican," a Stasi spy wrote in the 1980s.

A spokesman for the Stasi archive confirmed on Sunday that the East German secret police had indeed spied on Ratzinger, according to news agency dpa.

"The Stasi appears to have very systematically collected information about Ratzinger and his political situation within the Church during particular points in his career," the spokesman said.

At least eight Stasi spies tracked Ratzinger over the years, although only two have been identified.

Bild am Sonntag said the pope personally approved the release of his Stasi file.

Ratzinger was born in the southern German town of Marktl am Inn in 1927.

Germans eligible to vote headed to the polls Sunday. Pope Benedict XVI, who is still a registered voter in Bavaria, did not cast his ballot, his brother told DW-WORLD. (Sept. 18, 2005)

A German official who accused newly elected lawmakers of working for the former East German secret police rejected calls for her resignation on Monday. (Sept. 26, 2005)