Gateway to Europe: Syrian refugees in Bulgaria | Europe | News and current affairs from around the continent | DW | 25.10.2013

Bulgaria is seen as an interim stop for refugees trying to enter Europe. Its borders with Turkey mean that it has become a favored destination of late, but what it is like inside the official refugee camps? 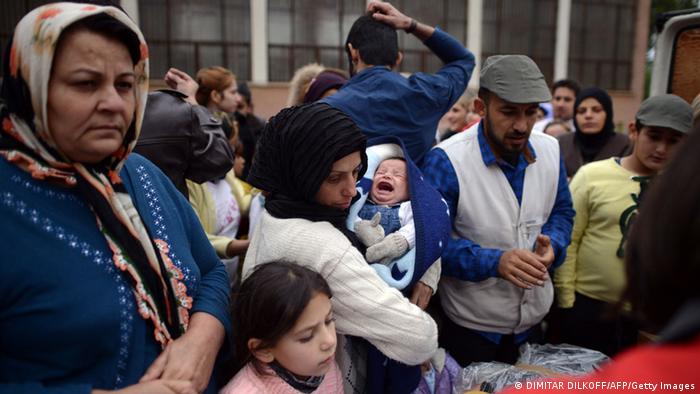 On the outskirts of the Bulgarian capital lies a former school where hundreds of Syrian refugees have been sheltering. The Voenna Rampa complex has no heat, no hot water and there's little medical care.

It's one of three shelters erected in the last month which are now full as the country struggles with an influx of asylum seekers mainly from the Syrian civil war. To many, Bulgaria is seen as an interim stop for refugees trying to enter Europe.

"Not even one in a thousand will want to stay here," said Abu Kemal, a Syrian restaurateur who has lived in Sofia since the early 1990s and has been helping the new arrivals. "They're going to Europe because they see a new [better] quality of life."

Not a soft landing

But for many the entry into Europe has not been the soft landing they were perhaps hoping for. The three new centers are already full, with the government struggling to build more to contain the new arrivals. 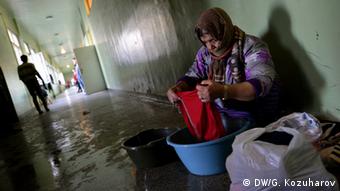 There is no heat, no hot water and little medical care at the camp

It has been a sensitive political issue. Police recently barred journalists from entering Voenna Rampa but residents there shared digital pictures of crowded conditions. Mattresses line the floor of former classrooms. There's an estimated one hundred people per bathroom.

"The hygiene of the centers is quite dire and really unsafe, particularly for the several dozen children that are accommodated in the centers," said Boris Cheshirkov, spokesman for the United Nations High Commission for Refugees' office in Sofia. The UN has taken on an advisory role and is urging Bulgaria to bring its refugee standards up to international standards.

The new arrivals say they are glad to have escaped the horrors of Syria but are worried about their future. Their children, they say, receive no health care and families are living on charity. 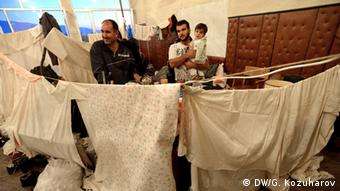 Three new camps have been errected in the last month, full to capacity

"We haven't received anything from the government," said 47-year-old Abu Mustafa who arrived a month ago with 10 members of his family in tow. "It only comes from Bulgarians and the Syrian community."

It's this charity that's making the difference. As Mustafa and others mill around the gate, a sedan pulls up with its backseat and boot full of food staples. Stoyko Sinapov, a 31-year-old professional from a nearby factory, calls out in English for help unloading a load of flour, sugar, toilet paper and a large sack of potatoes.

Sinapov told DW that about a half-dozen friends pooled together 150 euros to help refugees since his government isn't. "I don't know I don't know what the deal is with help from the country, but, everything that I can do – and my friends – that's good enough for us," he said.

'We spent our honeymoon escaping Syria'

Berivan Yusuf, a young Syrian woman who jokes that she and her husband have spent their honeymoon fleeing Syria, uses her English language skills to catalogue the donations that trickle in. Sinapov's load was the fifth of the day. "We are very grateful for them," she says of the Bulgarians and Syrians who are trying to help.

But experts say it will take more than good will to deal with what is turning into a long-term crisis for Bulgaria.

"We see a trend over the past six or seven weeks of more and more Syrian asylum seekers arriving in Bulgaria to the point where, on average, between 50 and 100 asylum seekers come to Bulgaria each day and about 70 per cent of them are Syrian families," said Cheshirkov.

This week, Bulgaria's government announced it is seeking six million euros in European Union aid as well as material assistance from fellow EU member states to deal with the crisis. The cabinet has also approved fencing at least part of the Turkish frontier to help control the arrivals. 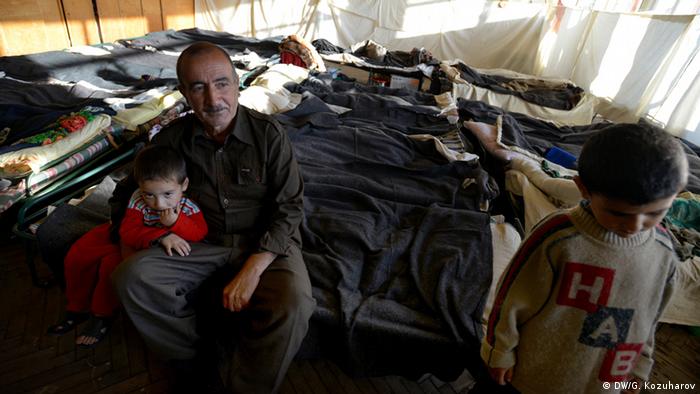 'Not even one in a thousand wants to stay here' but with border fences going up along the Bulgarian border with Turkey, future refugees could find their journey even more difficult

"The construction of technical utilities that will protect the most vulnerable part of the Bulgarian-Turkish border is starting immediately," Bulgarian Interior Minister Tsvetlin Yovchev said in a statement.

Bulgaria is asking member states for assistance -especially as many of these people are only entering the country in order to move further west to join friends and family already established in more affluent countries. That's true of 18-year-old Hussein Fatih who dropped out of his geology course at a university in Damascus to head for Western Europe. 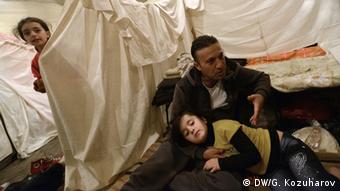 But even if these refugees were to be granted asylum status that won't automatically grant the right to live and work in another EU member state. And the path to Bulgarian citizenship takes at least three years.

Yusuf says she and her husband are also trying to reach family in Germany. She says conditions in the camp are not healthy.

The Bulgarian government says it had a 5,000-bed capacity for refugees. But with more than 8,000 now registered, the government is calling on the military to open more vacant buildings to new arrivals as it constructs two new centers.

That's because as the civil war in Syria continues to rage, officials from the state agency for refugees warn that the number of refugees could nearly double by the end of the year.

The uprisings in North Africa and the Middle East have done more than topple dictatorships; the unrest has also altered migration patterns. And the journey to Europe has become more precarious. (18.10.2013)

Local authorities in Germany fear their social funds are being used up by Romanians and Bulgarians who are taking advantage of the system. But a new study by the European Commission dismisses that belief. (12.10.2013)

Listen to Jacob Resneck's report from the camps