A new draft basic law for The Gambia seeks to ensure the shortest spell in office for any leader since independence in 1965. The cabinet of President Adama Barrow is not impressed. 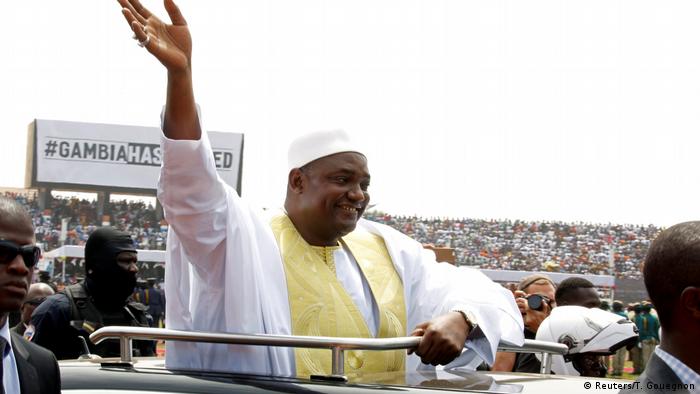 Dawda Kairaba Jawara, who led The Gambia to independence, ruled for more than 30 years. In 1994, Yahya Jammeh grabbed power in a coup and went on to rule for 22 years.

His successor, President Adama Barrow, came to office in 2017 with a promise to bring about far-reaching political reform to the West African nation. He set up a commission to review the constitution as part of the transition to democracy.

The Constitutional Review Commission in March presented Barrow with a draft constitution for the former British colony. It will be passed to the National Assembly in August.

Read more: Gambians get behind a movement to hold their leader to his word

It is now up to parliament to pass the draft 2020 constitution which is due be put to a referendum. A 'yes' vote from Gambians would usher in the country's third republic.

Civil society groups have called on Barrow to table the final draft in parliament. The justice ministry is in the final stages of repealing the existing constitution.

The draft constitution has been lauded as progressive.

"These rights are no limited to only to civil and political right but also social, economic and cultural rights in which the rights of women, persons with disabilities, and old people are especially guaranteed," said Jobarteh.

The president and his associates seem not too thrilled, however. Section 5 of the draft constitution states that no person will serve as president for more than 10 years.

Barrow has already served three years in office and wants to start a fresh ten-year mandate if he wins next year's presidential election.

His cabinet however, wants the Constitutional Review Commission to remove section 5 from the draft which, if passed, would bar President Barrow from contesting elections after 2021.

Barrow had pledged to step down after three years as president. However in January, at the end of his agreed time in office, he declined to relinquish power, despite considerable public debate, dissatisfaction and protest.

In response, some Gambians formed a now-banned movement called Operation 3-Years Jotna, which means "Three Years is Enough" in the local Wolof language.

At the end of last year, Barrow registered his own political party, the National People's Party (NPP), severing ties with the coalition partners that helped him win the presidency — including his former United Democratic Party (UDP).

Is Barrow being targeted?

Some independent legal experts suggest that Section 5 may well be intended to keep Barrow from repeating the pattern of his predecessors.

Darboe argued that the two-term limit clock should start from 2021 as far as the incumbent president Barrow is concerned.

But according to human rights defender Madi Jobarteh, the final draft in no way injures Barrow's interests or rights.

"What is guaranteed by law to Mr Barrow is that he has the mandate to be president between 2017 and 2021," Jobarteh told DW. "This has not been taken away from him."

"Hence there is no retroactive or discriminatory issue here. Secondly, it is not for Barrow to decide that he will be president from 2021 onwards. That is for Gambians to decide."

After two decades of dictatorship, the majority of Gambians support the term limit. Even though most of Barrow's supporters said the draft constitution is unfair to current President; many are of the view that Barrow should respect the constitution and be a model for other African leaders.

A nationwide survey conducted by the International Republican Institute's (IRI) Center at the end of 2019 showed that over 60% of Gambians want the president's current term to count.

Journalist Yusef Taylor thinks the term limit provision of a maximum of 10 years is progressive and will address the issue of presidents overstaying and also encourage fresh leadership in The Gambia.

Almami Fanding Taal — who lived under both Jawara and Jammeh's rule — said the two-term limit provision is long overdue and is a safeguard against dictatorship. He said he welcomed it and agreed that it should take effect and come into force upon its adoption by the referendum.