G20 finance chiefs have vowed to boost jobs and economies rather than austerity measures following a two-day meeting. Germany's finance minister praised the outcome, but warned leaders not to forget fiscal discipline. 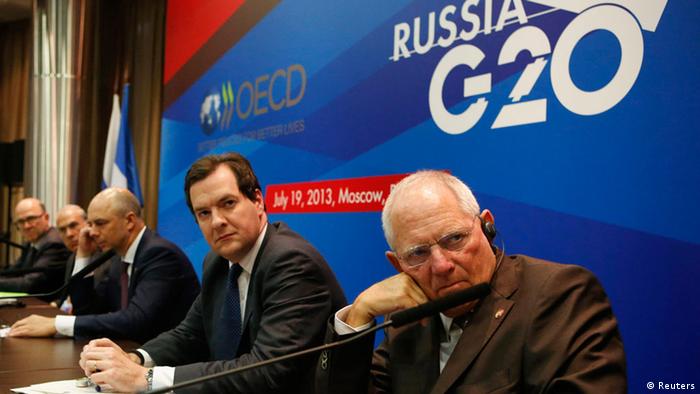 The two-day conference of the Group of 20's (G20) financial ministers and central bankers closed on Saturday in Moscow with resounding support for efforts to promote and coordinate national policies aimed at growing the job market and stimulating the economy.

"The global economy remains too weak and its recovery is still fragile and uneven," the group said in a statement released Saturday, referring primarily to the eurozone's continued struggle compared to signs of recovery in the US and Japan.

"We are fully committed to taking decisive actions to return to a robust, job-rich growth path," it added.

The rate of youth unemployment in Greece and Spain, for example, has worried EU leaders as it approaches 60 percent. Meanwhile, those governments must continue implementing deep-cutting austerity measures in order to meet deficit-reducing goals set by international lenders in exchange for bailout funds.

"Yes, budget consolidation is necessary in the medium term, but in the short term we have absolutely to put the emphasis on growth," Moscovici told reporters, according to the news agency AFP.

"Global economic conditions remain challenging, growth is too weak, unemployment is too high and the recovery is too fragile," Lagarde said. "So more work is needed to improve this situation."

Schäuble warns of too much easing

Speaking to reporters in Moscow, German Finance Minister Wolfgang Schäuble underlined his country's support for plans to stimulate job and economic growth, calling the fight to decrease unemployment "one of the greatest and most important challenges of our time."

"Unemployment in many countries is too high," he said.

There can't, however, be economic growth without prioritizing healthy state finances as a midrange goal, Schäuble said in reiteration of Germany's emphasis on fiscal discpline.

Germany has played a leading role in bailout talks between international lenders and debt-stricken EU countries. Many disgruntled citizens in the hardest hit countries, particularly in Greece, have demonized Berlin's role in their economic hardship.

Also at the top of the agenda was a plan by the Organisation for Economic Co-operation and Development to decrease tax avoidance, thereby increasing government revenue. Members backed the scheme, although the OECD did not set a deadline for its implemenation.

Leaders allotted more time to voice concerns about the US Federal Reserve's plans to scale back a stimulus program. Earlier this week, Federal Reserve Chairman Ben Bernanke announced he was considering easing the monthly injection of $85 billion (64.7 billion euros) into the economy through bond purchases, then bringing an end to the program by the mid-2014.

Leaders from emerging economies expressed fear that a swift end to the stimulus could have a negative impact on their own nations. The Saturday communique sought to dispel any fears of the potential for a poor implementation of major economic changes.

"One thing we would like to emphasize is the importance of coordination," Indonesian Finance Minister Chatib Basri said, according to the news agency Reuters.

The G20 statement on Saturday appeared to address these concerns, albeit vaguely.

"We remain mindful of the risks and unintended negative side effects of extended periods of monetary easing," the statement said. "Future changes to monetary policy settings will continue to be carefully calibrated and clearly communicated."

Details and figures are set to be published during the Leaders' Summit in St. Petersburg in early September.