Funerals Begin After Russian Hostage Tragedy | Europe| News and current affairs from around the continent | DW | 05.09.2004 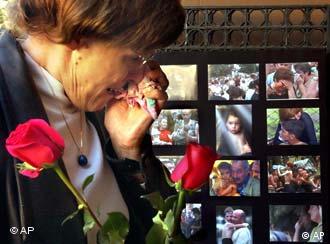 Wails of mourning echoed through the streets of Beslan Sunday

The streets were full of mourners, as the residents of Beslan started burying their loved ones on Sunday and the number of dead continued to rise in the wake of the hostage crisis that engulfed around 1,200 people.

Seven additional hostages died of their wounds on Saturday night, bringing the number of deaths to 330 hostages. Unconfirmed reports from rescue teams put the figure at 500. More than 200 children, parents and teachers were still missing Sunday. 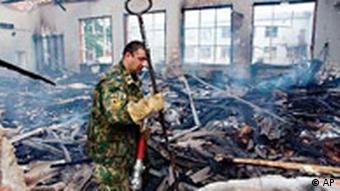 An emergency worker looks through debris and damps down fires at the destroyed sport hall of the school in Beslan.

Over 400 people, around half of whom were children, were being treated for their injuries in local hospitals, while some particularly badly wounded hostages had been sent to hospitals outside the region.

Tendering his resignation Sunday morning, the North Ossetia region's interior minister, Kazbek Dzantiyev, was the first political victim of the tragedy. "After what happened in Beslan, I don't have the right to occupy this post as an officer and as a man," ITAR-Tass news agency quoted him as saying.

Special forces stormed the school Friday after suspected pro-Chechnyan militants started shooting at hostages trying to escape from the building where they had been held in sweltering heat with neither food nor water for more than two days. 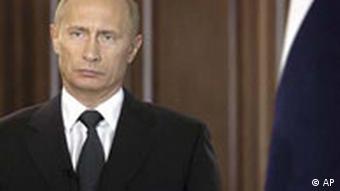 In a rare televised address, President Vladimir Putin said on Saturday that Russia had been weak in the face of terrorists and the country must rethink its approach to such emergencies.

"We must create a much more effective system of security. We must demand that our security forces act at a level appropriate to the level and scope of the threats," Putin said.

The identity of the hostages-takers remained unclear Sunday. Russian officials said that all 26 of them had been killed, 10 of whom were Arabs.

But Regional Emergency Situations Minister Boris Dzgoyev said Sunday that 35 attackers demanding Chechen independence had been killed in the 10 hours of fighting, according to the Associated Press. Reports that some of the hostage-takers were taken alive, were not confirmed by the authorities.

Dutch Foreign Minister Bernard Bot, whose country currently holds the European Union's rotating presidency, was busy trying to control the damage Saturday, after offending Moscow with his comments on the hostage crisis.

In a statement issued Friday, Bot said that "it was very difficult to judge from a distance whether the right decision was taken or not" by sending troops to storm the school, and that "we would like to know from the Russian authorities how this tragedy could have happened." He called on Russia to provide details of the raid that ended the stand-off.

The Russian foreign ministry called Bot's comments "odious" and "deeply offensive" in a statement Saturday, and Foreign Minister Sergey Lavrov was quoted as calling them "blasphemy."

Bot said he had been misunderstood. "I will certainly clear up the spat with Lavrov," he said Saturday evening.

While estimates of the number of people killed in the hostage-taking drama in a Russian school rose ever higher on Saturday, many questions remained unanswered the day after a siege put an end to the crisis. (Sept. 4, 2004)