From Iceland to Euro 2016 via Augsburg

At 27 years old, Finnbogason has achieved all of the above, and he's a long way from being finished. The next steps in a career less ordinary are the ongoing Bundesliga campaign with Augsburg, and Euro 2016.

The striker joined the German side on loan from Spain’s Real Sociedad on February 1. Augsburg hope he can re-capture the form that saw him score 29 goals to win the golden boot with Heerenveen in Holland in 2013-14. He's already scored twice for his new club, including a last-minute equalizer from the penalty spot in Saturday's 2-2 draw with Darmstadt. He’ll be hoping to continue hitting the back of the net in order to cement his place in the Icelandic national team for this summer’s tournament in France.

Iceland just missed out on the 2014 World Cup after losing in the playoffs but recovered to qualify for Euro 2016, doing the double over the Netherlands in the process. There’s little doubt that this is the best period in the footballing history of a country with a population of just over 300,000.

The current crop of national team players made their first big statement at the European under-21 championship in 2011, beating a German side that featured Mats Hummels 4-1. 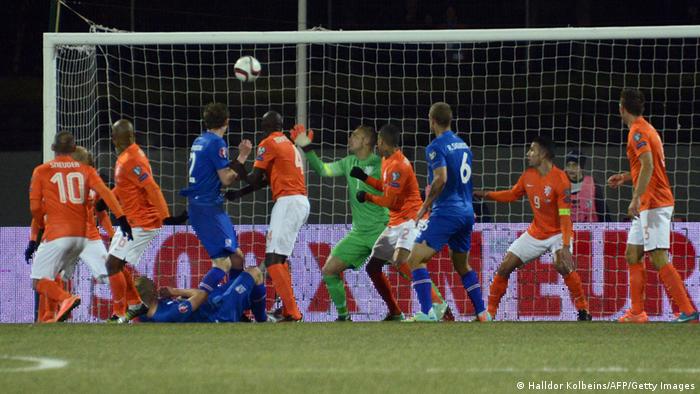 Iceland beat the Netherlands twice on their way to Euro 2016 qualification.

“"From this group we have, I think, nine players in the national team and this is the core of the team," Finnbogason said in an interview with DW television’s Kick Off show. "We have been playing together for eight to 10 years, we know each other. We play well together as a group and outside the field we are friends."

"So you have this group of players who are playing at a higher level for Iceland, playing in the English second division, Premier League. Some play Champions League and this kind of level. The players from this team are a special group of players."

The nomadic striker, along with players like Swansea’s Gylfi Sigurdsson, is part of the first generation to have benefitted from the country’s increasingly sophisticated approach to the sport, with big money being pumped into coaching and into football infrastructure. 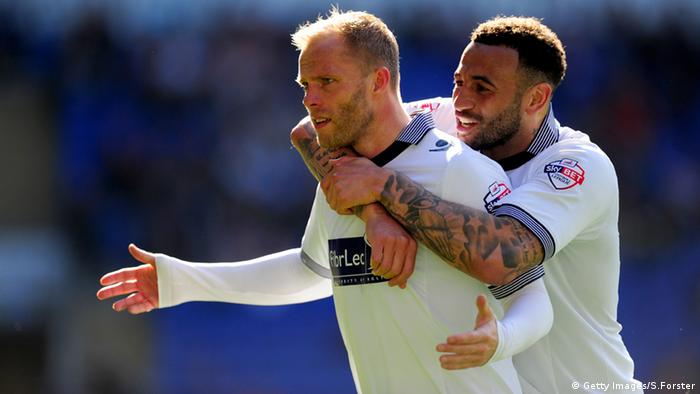 Eidur Gudjohnsen (left) is an inspiration to many Icelandic footballers, including Alfred Finnbogason.

This means their recent success won’t be a one off, according to Finnbogason. He pointed to the development of artificial pitches across Iceland that allowed his generation to play through the winter - a luxury not afforded to their predecessors - and to the influence of the country’s most prominent player as reasons why the current football development is sustainable.

"Eidur Gudjohnsen was a big hero for all Icelandic youth players growing up because they saw an Icelandic player playing in the Premier League at the highest level, so that really gives you inspiration," he said.

"You don't reach any higher than that - winning the Champions League with Barcelona. That's something that will be hard to emulate for any other Icelandic player."

Finnbogason got the chance to play with his hero for Iceland, with Gudjohnsen returning to the international scene in the Euro 2016 qualifiers. After spells in Iceland, Belgium, Sweden, Holland, Spain and Greece, the Augsburg man said making a mark in Germany was next on his to-do list.

"I'm pleased that I got the chance to play here in the Bundesliga, which is in the top three leagues of the world," he said. "Every game has full stadiums, lots of tempo and I really like the style of football here."

"Every move I've made has its reasons. It's not that when I was a young boy I wanted to play in 10 different leagues or something. I wanted to have a good career, I wanted to enjoy myself, to experience different things and that is what I'm really doing."

Finnbogason has already had an impact in Germany. The first of his two goals so far came in Augsburg’s 2-2 draw with Borussia Mönchengladbach,though he said he didn’t see the ball hit the net after a clash with an opposition defender: "I could only hear the cheering from the fans," he said. "There's nothing like the feeling of scoring."

If he gets on the scoresheet in France this summer, he might just hear the roar of the supporters all the way from Reykjavik.