From Easel to Exhibit to Art Enthusiast | Culture | Arts, music and lifestyle reporting from Germany | DW | 29.10.2006

With the most art institutions per capita in the world, Germany is a leader in the art trade. Buyers, it seems, prefer trendy art fairs to stuffy old galleries or even click onto Ebay for their Monet or Manet. 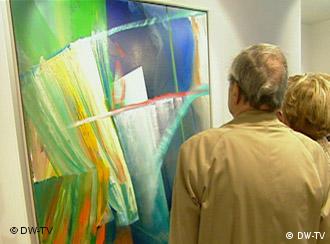 Gallery owners are perhaps the most influential players in the game of art, where the stakes end in a long line of zeros and subjectivity is the rule. Non-commercial institutions like museums, art societies and critics are important as well. After all, they set the trends and tip market values by increasing the name recognition of certain artists.

"It depends on how much they're able to influence the right people and affect their opinion about the products. Networking between galleries, artists, critics and institutions plays a big role in this," said Cologne gallery owner Rolf Hengesbach.

These networks are particularly dense in Germany, he added, which has led to a strong development of the art market. 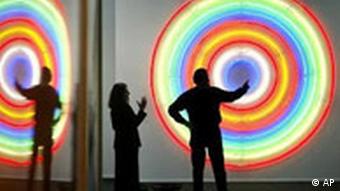 Making a sale is the "Target," as is the title of this work by John M Armleder

Another plus for the German art market is the country's federalist system. Unlike France or England, Germany has many centers of art, which enhances regional diversity.

In a centralized art market, one leading institution -- such as an important museum in the country's art capital -- would control trade. But in Germany a diverse collection of museums with varying structures and styles are involved.

The competition that comes from pluralism has been quite fruitful, said Hengesbach.

In terms of the sheer number of galleries, art fairs and public art institutions, Germany takes a close second to the US. Measured per capita, the German art market is head and shoulders above all the rest, according to the Web site artfacts.net.

However, the exact number of art galleries in Germany is rather vague. Depending on how they're defined, the figure varies from 1,300 to 2,000. 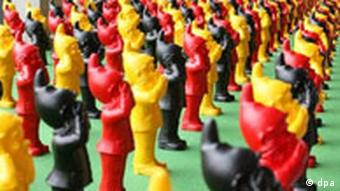 While galleries bear the brand of tradition, art fairs -- which entered the playing field some 40 years ago -- are the fresher marketing approach.

"Art Cologne" was long considered a forerunner in the art fair world, but its significance has dimmed in recent years as new fairs in Berlin and London -- as well as old faithful in Basel -- have stolen the show. A new fair has also been founded in Karlsruhe, and Düsseldorf is next on the list.

While galleries are complaining of fewer and fewer visitors, art fairs are opening their doors to a readily increasing number of enthusiasts. Many gallery owners have responded by participating in fairs themselves, where they gain more than just sales.

"Art fairs are there to make contacts, get to know new collectors and curators and to do business with colleagues that place artists in other galleries," said Susanne Zander, deputy chairwoman of the Federal Association of German Galleries. "Art fairs are incredibly important." 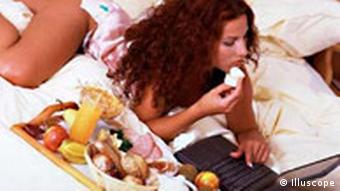 Naturally, a functioning art market can't do without paying customers. There's always the deliberate collector and the classic gallery visitor. But more and more, spontaneous buyers are also pulling out their pocketbooks at art fairs.

The Internet has added yet another twist to the art of selling art. Not only have virtual galleries sprung up that function entirely over the Net, but some traditional gallery owners are also finding themselves selling via e-mail to buyers they've never met.

The German art market may be flooded with a diverse collection of dealers, but to maintain a competitive edge on the global market gallery owners will have to become more professional, said Zander.

"It would be great to establish a master's degree in art dealing, as part of an art history degree program," she said.

When the Berlin senate unexpectedly returned a Kirchner painting to the heirs of its original Jewish owner, critics protested that it's not a World War II restitution case. The work is now awaiting auction at Christie's. (19.08.2006)

Hilla von Rebay: The Woman Behind the Guggenheim Collection

The Guggenheim exhibition opens in Bonn on Friday. But this collection would not be what it is today without the influence of its founding director Hilla von Rebay, one of the 20th century's most remarkable art patrons. (21.07.2006)