From acronyms, to awareness, to action: Getting the UN message across | World| Breaking news and perspectives from around the globe | DW | 10.03.2017

From acronyms, to awareness, to action: Getting the UN message across

No poverty, zero hunger, sustainable consumption, reducing inequalities - the UN's 17 sustainable development goals (SDGs) have set an ambitious global agenda for 2030. It's also a huge task to get the message across.

"The intermediate goal is for at least two billion people to know about the sustainable development goals by the end of 2018," says Xavier Longan.

Longan is the European head of the United Nations' SDG Action Campaign. He's aware that knowledge of the UN's plan of action launched in 2015 is far from widespread. The ultimate goal of greater sustainability, peace and prosperity for all can only be achieved, however, if everyone helps to move forward the agenda.

"SDGs" stands for Sustainable Development Goals - not the catchiest of phrases.

But the logos used for the SDGs campaign are at least bright and cheerful: a circle in the form of a wheel, with colored spokes, and the squares in different colors bearing symbols to represent each of the individual goals. 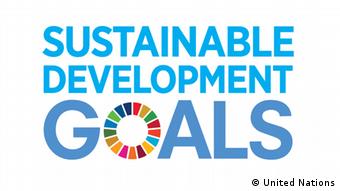 The colorful SDG logo aims to convey an upbeat vision

The German city of Bonn flies the logos on flags, and if you ask people in town what they know about the goals, at least some guess along the right lines: "Something to do with the environment," or "fighting poverty."

Ina survey conducted in 13 countries in 2016, around a quarter of participants had heard about SDGs. In Kenya and Nigeria the figure was over 30 percent, and in India over 40 percent.

There are no comprehensive global surveys yet.

What is clear, however, is that hardly anyone has in-depth knowledge of all 17 goals and 169 sub-targets. A new global information campaign on SDGs is therefore being launched on March 1st.

The Agenda 2030 is the new basis for all areas of the UN - and accordingly complex.

"The development goals are difficult to convey as an overall agenda - a huge range of goals all connected to and influencing each other," says Felix Zimmermann, coordinator of the OECD Development Communications Network in Paris.

"What's easier to talk about is concrete content, e.g. about the war on poverty, education and jobs, which everybody can understand and relate to." 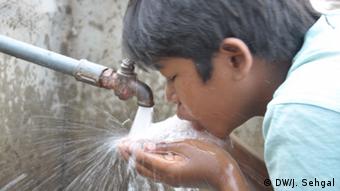 Millions across the world lack access to clean water. Safe water and sanitation for all is one of the global goals

The SDG campaign therefore targets people by making the goals more visible and personal. A Facebook campaign for instance features personal stories about the importance of clean water, or why girls need to attend school.

It's especially important to reach the younger generation.

In France, for example, cartoon figure Eric introduces pupils to sustainable goals. In Sweden a popular YouTube star is now youth ambassador for the SDGs. And UNICEF recently recruited the promotional support of the Smurfs, with videos providing a fun way for children to learn about the issues.

Xavier Longan is optimistic the message will be getting across. "After just over a year the SDGs are already better known than their predecessors were, the MDGs (Millennium Development Goals)."

One of the reasons, believes Longan, is that the SDGs were created in a transparent process and not behind closed doors. In addition to governments, NGOs and experts worldwide, more than 10 million people submitted their own input, including via online platforms.

The SDG Action Campaign is now working with local partners and NGOs to convey the goals, says Longan. It provides materials free of charge, including photos and virtual reality films. Additionally, an interactive SDG game app is being tested at a conference in Bonn.

By the end of 2018 the campaign aims to recruit 700,000 volunteer SDG activists worldwide, who will be actively supporting the global goals in their villages, colleges and clubs. 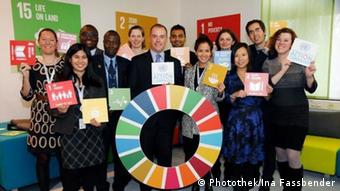 "Giving the goals greater exposure is just the first step. The main point is putting them into practice," says Felix Zimmermann from the OECD. And when it comes to realizing the universal agenda in practice, he adds, everyone is needed: governments, NGOs, companies and regular citizens.

How can globalization opponents be won over?

Many countries have already begun incorporating the UN agenda into domestic policy. Germany has amended its sustainability strategy, for example. At the same time, however, the challenges are growing.

Surveys of EU member states indicate falling confidence among citizens in governments and public institutions. Add to that growing skepticism towards globalization and nationalist movements in an increasing number of countries.

"The problem is that people in the international institutions often talk only to their colleagues, i.e. we stay in our own bubble. That means losing sight of what people outside are actually thinking," says Zimmermann. "How do we win over opponents of globalization, for example? That's a question we still have no answer to."