There are 65 days left until Germany coach Joachim Löw announces Germany's final squad for the World Cup. Some of the spots appear to be set, but several players will still have something to prove to make the team. 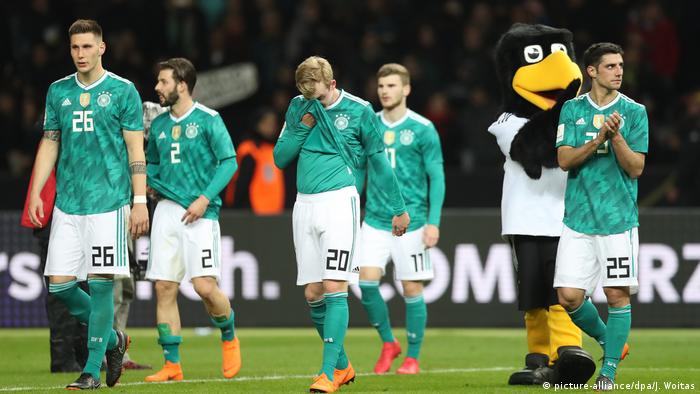 He earned his first senior team cap after the 2014 World Cup in Brazil, clearly missing out on the tournament. He also didn't make the cut for the 2016 European Championship in France. This year, might be Rudy's best chance of representing Germany at a major tournament.

Rudy was a central figure for Germany in their 2017 Confederations Cup victory, playing all but 16 minutes in central midfield during the five game tournament. He also started two of Germany's last four World Cup qualifiers after completing a move from Hoffenheim to Bayern Munich in August. 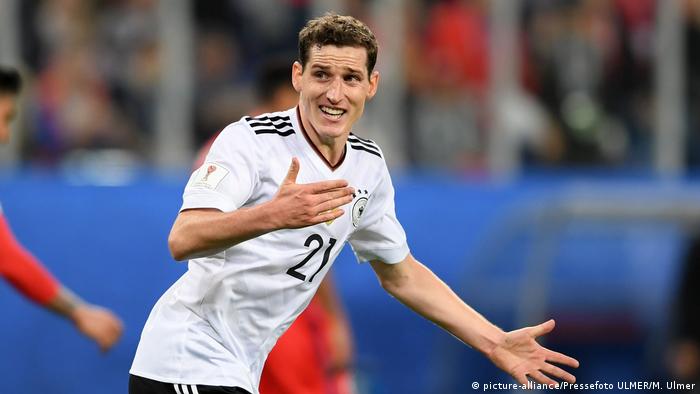 However, Germany coach Joachim Löw has since brought Ilkay Gündogan and Sami Khedira back into the fold, increasing the competition for a spot in midfield. Additionally, Löw seems keen on bringing Emre Can, who has played consistently for Liverpool at the club level.

Rudy has not been able to get as much playing time at Bayern as he had at Hoffenheim, which is a minor factor that could tip the scales. After not playing in both March friendlies, he will need to impress in his limited opportunities with Bayern, or risk missing the cut for a third straight major tournament. 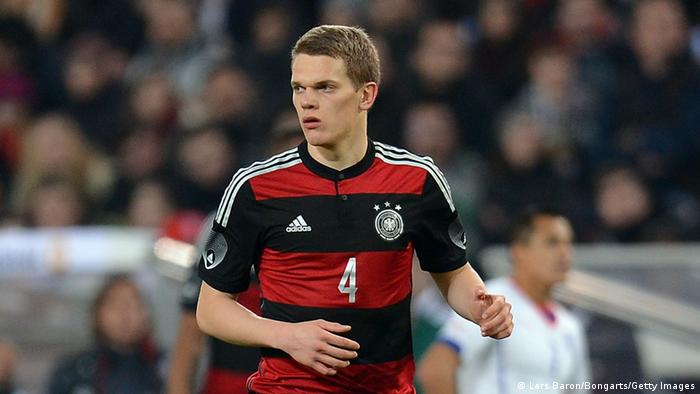 Ginter was one of the nine defenders Löw took to the 2014 World Cup, although he did not feature once in Brazil. This time around, the Gladbach defender may have a tougher time earning a seat on the plane to Russia.

Read more: Germany's loss to Brazil just a reminder of how different they are in friendlies

His career has progressed in the right direction at club level; after failing to secure a place in Dortmund's team, he moved to Gladbach before the start of the season and has played every possible minute for the Foals. But other young German defenders have made similar progressions — Niklas Süle has become a viable third option for Bayern Munich behind starters Mats Hummels and Jerome Boateng, while Antonio Rüdiger has become a regular at Chelsea.

Ginter acknowledged the competition he faces before Germany's game against Brazil, but added that central defender is not the only area of the field with a plethora of options.

In fact, his inclusion may simply depend on how many defenders Löw decides to take. Rüdiger and Süle appear ahead of him currently, but if the German coach decides to take five central defenders to Russia — like he did in 2014 in Brazil — Ginter may have a chance. If not, he could be watching the World Cup from his living room instead of Germany's bench. 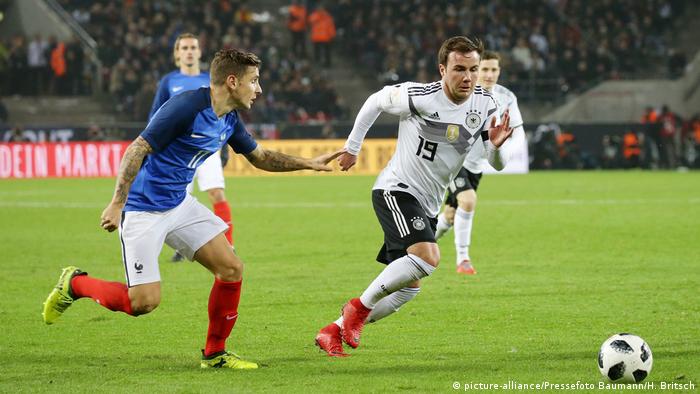 Götze has seen his career plummet since he scored the World Cup winning goal against Argentina in 2014. He was shipped out of Bayern in 2016 after failing to break into the starting lineup and has largely disappeared from the national team outside a call-up in November.

Fitness issues have certainly played a role for the Borussia Dortmund attacker — he missed four and a half months after suffering from myopathy, a metabolic disease that causes fatigue and weight gain. In that time, other forwards such as Lars Stindl and Timo Werner have risen up the ranks in his place.

Löw may still consider the one-time German prodigy, but unless he improves his form — and his fitness — over the next two months, it is unlikely Götze will participate in this year's World Cup. 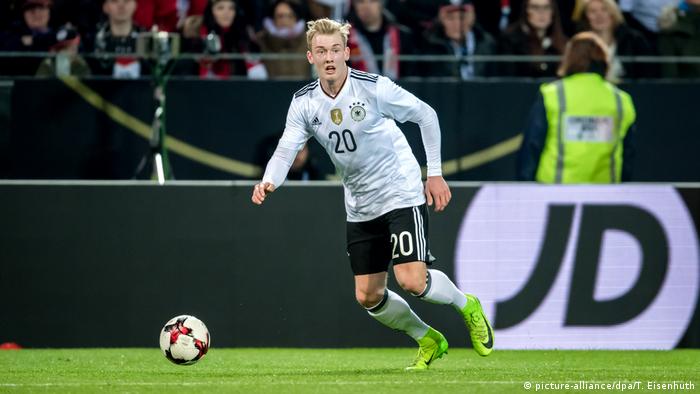 Brandt has become a poster boy for how Germany continues to churn out talent. His emergence with Bayer Leverkusen over the past two and a half years has opened several opportunities with the national team — he did not miss a single call-up during 2017.

But it was Leroy Sané and Julian Draxler who Löw used in Germany's friendlies against Spain and Brazil, and Brandt only received a half-an-hour cameo against Brazil. His inclusion in the final squad may also depend on the status of Marco Reus. Löw elected to spare Reus, who missed the 2014 World Cup and Euro 2016 due to injuries, for this month's friendlies, but if the Dortmund forward is healthy, the German coach will have to include him simply due to his game-changing potential.

Brandt is rather versatile — he played as both a winger and a wingback for Germany in 2017 — but that may not be enough to convince Löw to bring him to Russia. 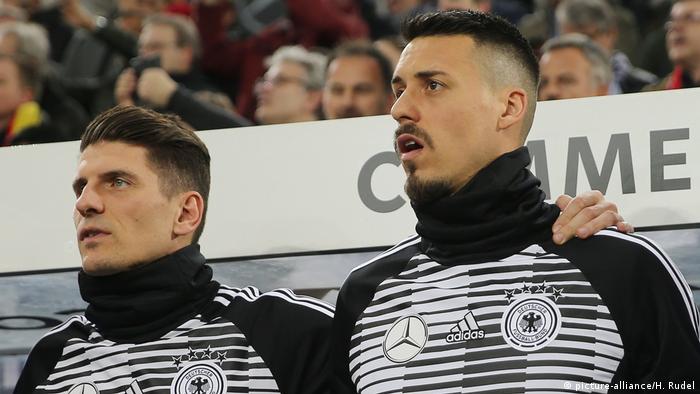 Mario Gomez and Sandro Wagner both played against Brazil on Tuesday

After missing out on the World Cup in 2014, Gomez was the man of the hour for Germany at Euro 2016 — he scored two goals in four games before suffering an injury in the quarterfinals. But the Stuttgart striker seems to has fallen behind another quality target man: Sandro Wagner

With Werner seemingly the primary option, Gomez and Wagner appear to be the battling out for a spot as Germany's target man. Wagner has the advantage of playing with Bayern, a team that has many Germany internationals in the squad. However, Gomez is Stuttgart's central figure, which means he will be playing more than Wagner at the club level.

With similar skill sets, Löw will likely only take one of the two, and the way each performs the rest of the club season may tip the scales.

A Kevin Trapp blunder allowed Gabriel Jesus to secure Brazil a 1-0 win and end Germany's 22-match unbeaten run. The world champions were second best for most of the match, allowing Brazil a small measure of revenge. (27.03.2018)

How Germany's players rated against Brazil

Brazil gained revenge for their 2014 World Cup hammering, but disappointing Germany bore little resemblance to the heroes of Belo Horizonte. Goalkeeper Kevin Trapp may have blown his chances of going to Russia. (27.03.2018)

It's been 27 months since Germany embarked on a rebuild following an early exit from the 2018 World Cup. Performances have yet to materialise and Joachim Löw is still trying to put together a convincing blueprint.

For much of Wednesday night, Germany and Joachim Löw were staring down the barrel of another embarrassing early Euros exit. Despite qualifying, they were poor against Hungary and their flaws remain, says Matt Pearson.

Borussia Dortmund captain Marco Reus has ruled himself out of Germany's squad for the European Championship. The 31-year-old has endured a strenuous season and wants to allow his body to recover.