France cut the ribbon Thursday on a super-fast new rail line that will see trains shooting from Paris to the eastern city of Strasbourg at a record speed of 320 kilometers (200 miles) per hour. 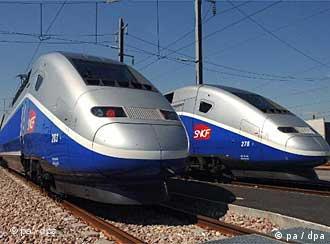 Transport Minister Dominique Perben, traveling with dozens of French business leaders and guests, made the inaugural eastbound journey from Paris Thursday on board the new TGV-Est, ahead of a lavish evening ceremony.

Some 3,000 torches were due to light up in a wave along the entire 300 kilometers of the rail line in a spectacular pyrotechnic show broadcast on national television.

The new TGV service is the latest attempt by European railway companies to counter the popularity of budget airlines which charge a fraction of the cost of rail tickets to the same destinations. By providing faster services, coupled with rising concern over the environmental impact of no-frills air travel, railway operators hope that customers will return to train travel. 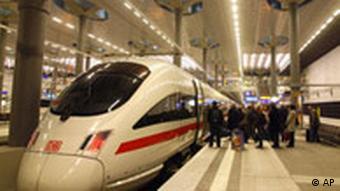 Deutsche Bahn, the German railways operator, hope that its state-of-the-art new main station in Berlin will act as a European hub for rail travel, and change the minds of those travelers who consider budget flights as their best option for reaching European cities. In Brussels, a modernization of the Midi station into a true international hub serving the Eurostar, TGV, Thalys and ICE services hope to have the same effect in the capital of the EU.

The EU itself has come up with initiatives to open the rail market and create consistent standards and infrastructure. It wants to create a standard license for train conductors as well as to bring the varying signal and security systems across the continent in line with each other on all major tracks in an attempt to increase efficiency and choice.

European countries have been waking up to the need for bigger and better train systems for a number of years. Work began five years ago on the state-of-the-art Paris-Strasbourg TGV line, which opens to the public on June 10. One of the biggest rail projects in Europe, it mobilized some 10,000 workers and required 78,000 tons of steel -- enough to build eight Eiffel towers.

Last month, it was on the Paris-Strasbourg line that the TGV broke its own world record by hitting a peak speed of 553 kilometers per hour during a test run. It is to attempt a new high-velocity breakthrough in the coming weeks. 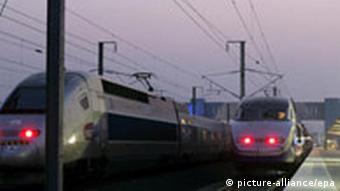 The new train will cut the Paris-Strasbourg trip to two hours and 20 minutes from the current four hours. It will also slash travel time to points further east, making the trip from Paris to Luxembourg in about two hours, to Frankfurt in less than four and to Munich in six hours and fifteen minutes.

"Some 37 million Europeans can be reached," said TGV-Est director Alain Le Guellec. "A network of high-speed links is being put into place with the rest of Europe."

Perben announced on Monday that the second phase of construction -- which will knock another half-hour off the journey time from Paris to Strasbourg, to one hour 50 minutes -- would be brought forward from 2010 to 2008.

But there are doubts over whether the rail service will be commercially viable.

The project cost of four billion euros ($5.3 billion) is being shared among 22 financial partners at various levels of the French government, as well as Luxembourg, the European Union and the French state-owned railway SNCF.

Germany's ruling coalition has agreed to partly privatize the country's federal rail system by 2009, government officials announced on Wednesday in Berlin after months of wrangling. (09.11.2006)

EU officials say that much more money and effort is necessary to integrate Europe's railways. (27.05.2006)

A leading German investor representative group has roundly criticized Berlin's plans for selling off the nation's railway company, saying Deutsche Bahn AG was not ready for a stock market listing. (25.12.2006)