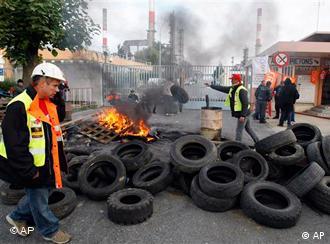 French strike action against unpopular pension reforms pushed by the government of President Nicolas Sarkozy continued Monday as demonstrators moved to blockade a large fuel depot in the south of the country.

Some 200 protestors seized control of the depot at Fos-sur-Mer, believed to be the largest in southern France, as riot police looked on, according to news agency Agence-Presse France.

Meanwhile, a depot in central France, at Saint-Pierre-des Corps, was freed after a week of paralysis when around 30 demonstrators walked away from the site without incident.

Strikes in the country's oil industry and blockades of fuel depots have left 35 percent of gas stations in the Paris area completely dry or out of at least one kind of fuel, a Transport Ministry spokeswoman said. About one-third of gas stations in western France were in "real difficulty" and 10 to 15 percent in the rest of the country were empty, she added.

Unions have already called for two more days of strikes, and university students are planning nationwide marches on Tuesday in last-ditch efforts to stop the pension reform before a reconciliation between the two houses of parliament and a final vote by the National Assembly expected Wednesday. 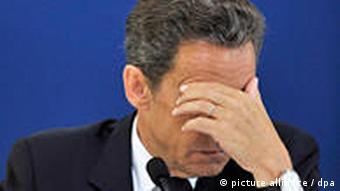 Sarkozy hasn't been able to stop protests - or his sinking approval

Sarkozy's government insists that the pension reform, which will raise the minimum retirement age to 62 from 60, is "inevitable" and the only way to fill an expected pension budget gap and reduce the country's growing deficit. But the opposition Socialists say if they win presidential elections in 2012, their candidate will restore the retirement age to 60.

Polls suggest a majority of French voters support or sympathize with the strikers, but Jean-Francois Cope, leader of Sarkozy's UMP party in parliament, blamed the widespread disruption on the work of a minority.

"Strikes, protests, yes, but taking the economy hostage is intolerable," he said in an interview with Le Parisien newspaper. "Most of the country is paralyzed by the actions of a handful of extremists. Everyone should understand that we have no other choice."

As the unpopular pension reform plan moves closer to becoming law, Sarkozy's approval rating has dropped to an all-time low, dashing hopes that the legislative achievement could bring him a political comeback.

A poll conducted by the IFOP institute and published in the Journal du Dimanche newspaper on Sunday showed only 29 percent of respondents were satisfied with Sarkozy's job performance. That was down three points from September, and was a new low for the president since he took office in 2007.

Sarkozy and his allies are hoping that the ongoing protest and strike movement in opposition to the pension reform will die down as families leave their homes for the mid-term school holiday this week.

French police cleared protesters blockading fuel depots and skirmished with young demonstrators as the government warned of economic damage from the prolonged strikes. (20.10.2010)

More than one million protest against French pension reform

Unions and students have continued their protests in France ahead of a crucial vote on pension reform. Travelers are facing major delays as fuel reserves run low. (19.10.2010)