A day before a large union demonstration set to take in Paris, police have pulled the plug. Previous demos were marked by violence, and security forces are already under strain due to the Euro 2016 tournament in France. 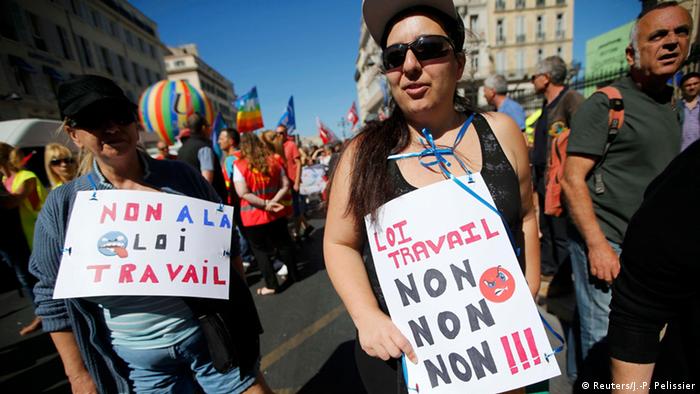 Wednesday's decision by French police to ban a labor union march - scheduled for Thursday - could lead to increased tension between the French government and unions. Earlier this week the French government said a stationary rally would be permissible, but the union insisted on its right to conduct a march.

French police said Wednesday they would be unable to be ensure the protest's security if it went forward as planned. After the demonstration was called off, the leaders of two of France's biggest unions - Philippe Martinez of the CGT Jean-Claude Mailly of FO - demanded to meet with Interior Minister Bernard Cazeneuve. Officials preventing a rally for going forward in this manner is a very rare occurrence in France.

Speaking on France's iTELE television station, lawmaker Christian Paul called the move a "historic mistake" and said it was the first time since 1958 that the "government – a prime minister" banned a demonstration by large trade unions. Paul is in the same socialist PS party as President Francois Hollande and Prime Minister Manuel Valls and leads a group of parliamentarians in the party against the government's planned labor reforms, which affect companies' ability to hire and fire workers as well as the length of the work week.

Earlier in June, as France was preparing to launch the still-running European Championship soccer tournament, a series of strikes left garbage piling up in the streets and transportation systems running with significant delays as thousands of fans came to France for the tournament. A labor demonstration last week turned violent, leading to 40 people injured and dozens of arrests.

After a children's hospital in Paris was damaged by a small group of violent protesters at last week's demonstration, a spokesperson for French President Francois Hollande said "at a time when France is hosting the Euro (football tournament), when it is faced with terrorism, demonstrations can no longer be authorized if property and people and public property cannot be safeguarded."

Although the trouble was caused by a few of the otherwise peaceful demonstrators, police estimated there were 80,000 people at the protest in the capital.

Against the backdrop of Euro 2016, nationwide strikes are washing over France as workers protest labor market reforms making it easier to hire and fire employees. Even the Eiffel Tower was closed because of the walkouts. (14.06.2016)